Lyon Confluence, the peninsula at the confluence of the Saône and Rhone, formerly occupied mostly by wholesale markets, is undergoing fundamental change. The design plan for the southern part of the peninsula (Herzog & de Meuron) adopts the old structure of Lyon's blocks.  Diener & Diener, together with Clément Vergely architectes, Lyon, and Joud Vergely Beaudoin architectes, Lausanne, were commissioned with the design and execution of the five-part block "B2". Diener & Diener were responsible for the architecture of the student residence ("B2.04") and the nine-story building on the Esplanade François Mitterand ("B2.03").

The latter, a residential and commercial building, faces the new dock on the Saône and the park of the Esplanade François Mitterand, which gives it a special position. Its height (R+8) makes it stand out from the surrounding houses. In the design, the prominent location is underlined by a monumental appearance. Two-story concrete columns support balconies all around the two long sides of the building, spanning equally between the apartments, offices and the street. The positions of the prefabricated, sculpted columns within the regular grid are different, as if they were dancing. Between the columns, light railings made of twisted steel strips can be found. Behind them, the plastered masonry and the French windows can be seen without disturbing the play of the columns. Two spacious staircases, reminiscent of bourgeois residences, provide access to the floors. Restaurants are located on the first floor. The offices on the first floor and the apartments on the second to the eighth floor are freely arranged on the storeys supported by the facade walls and by the columns. The client agreed to the proposal to increase the clear height of the apartments to 2.85 m instead of a ninth floor. The apartments can be more flexibly converted into offices or vice versa through this move. The facades of the block adopt variations of openings, from the grid ("B2.03") to the aperture wall, the historical themes in the urban fabric of Lyon. The student housing ("B2.04") at 120, rue Delandine, faces the street with precise angles. A finely veined natural stone base of dark hue gives the building its own character within the neighborhood. The collective living areas are orientated towards the intersection of rue Jacqueline and Roland de Pury. While the structure of the building is built on the stacking of similar spaces, the play of openings allows a different reading of the interior of the building. The pace and movement of the windows emphasize the different dedication to each interior space, committed to privacy, community and work. 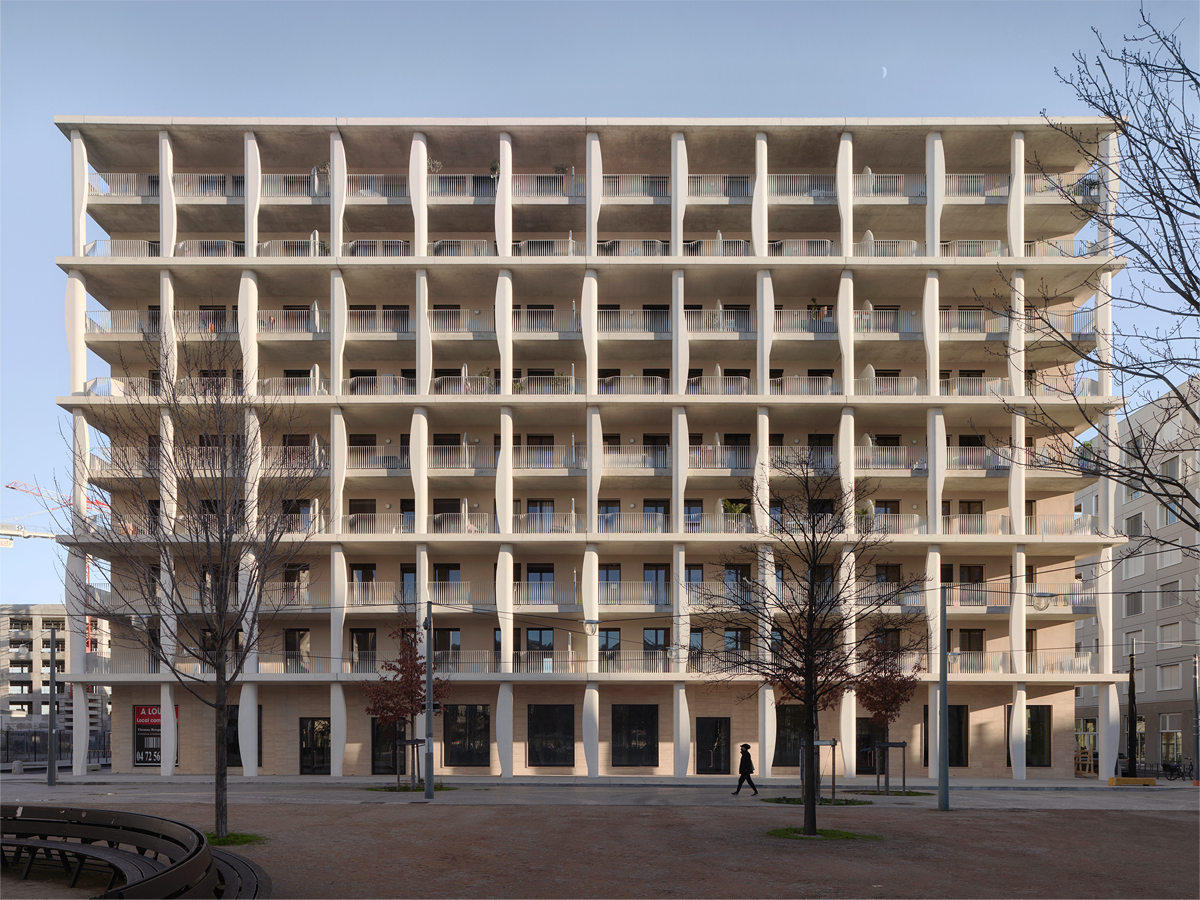