The KNSM-and Java-Islands in the East Harbor of Amsterdam date back to the end of the nineteenth century. Constructed as breakwaters off the docklands, they served to protect the large trade vessel discharging their cargo onto smaller ships. The KNSM-Island refers to the east leg of the Y-shaped island (named for the Royal Netherlands Steamship Company (KNSM) that used this side) while Java-Island refers to the island’s west leg. The shape and location of the island relate it to the city in a specific way: Java-Island runs parallel to the harbor and KNSM-Island juts westward to the city center at an oblique angle.

The former buildings of the Steamship Company occupy the “transitional zone” located between the two halves of the island. As the result of developments to urbanize the location, these needed to be reorganized. All the buildings face outward and engage the docks, without there being any internal dialogue between the separate buildings. Staggering the two new residential buildings gives the seam that joins the KNSM-Island and Java Island a spatial depth. The “long” house and the courtyard building, both located at the junction where the bridge and the dam create a link between the island and the docks, point to the interior of the Y-shaped island. Their size and location establish a relationship between the old harbor buildings and those buildings that were added to the islands subsequently as part of the urbanization plan. When seen at a distance, these buildings define distinct endpoints for the two superblocks apartment buildings designed by Bruno Albert and Hans Kollhoff. When seen up close, however, their connection to the buildings of the Steamship Company becomes apparent.

The extended form of the Long House contrasts with the giant residential apartment buildings that like a pendulum extend into or rather along the waterfront. At first glance, the building’s appearance is not that of a residential building. Its body appears structural while its transverse axis has an air of permeability. The second house, set back from the water, also shares clear similarities to a hotel or warehouse. In addition to the typological affinities that both buildings share with storage facilities or shipping centers and in addition to their spatial constellation, what relates and sets this unequal set of buildings apart from the existing structures around them, is the bricks used in their façade.

The different, overlapping relational systems that characterize the developments within this transitional zone create a precarious balance between the old and new buildings. This balance is reflected in the ambiguity that characterizes the internal organization of the two buildings. In the Long House, apartment follows apartment and room follows room. Where the apartment super block seeks to create a play between the windows, loggias, and balconies, this building relies exclusively on a single type of wall opening. Moreover, analogous to the layers within the wall structure, each window, floor by floor, is displaced by the width of a half-brick. This makes the openings themselves the building blocks of the house’s volume. The ground between the Long House and the old quay wall has sloped, the result of a landfill. This recalls the repeated process by which water was turned into land and to which this island owes its origin.

The smaller courtyard building has a decidedly more public character. On its eastern side facing the Mien Ruys Park, the cubic building overhangs the main access road. There is no hierarchic order that establishes a connection between the apartments themselves. All the rooms have similar proportions and the windows and doors all run either frontally and laterally, depending on their orientation. Centered on a shared courtyard with an arcade, the buildings encourage forms of cohabitation independent of traditional family structures. The windows of the brick façade interact with one another in ways that avoid the effect of static rigidity or frontality. 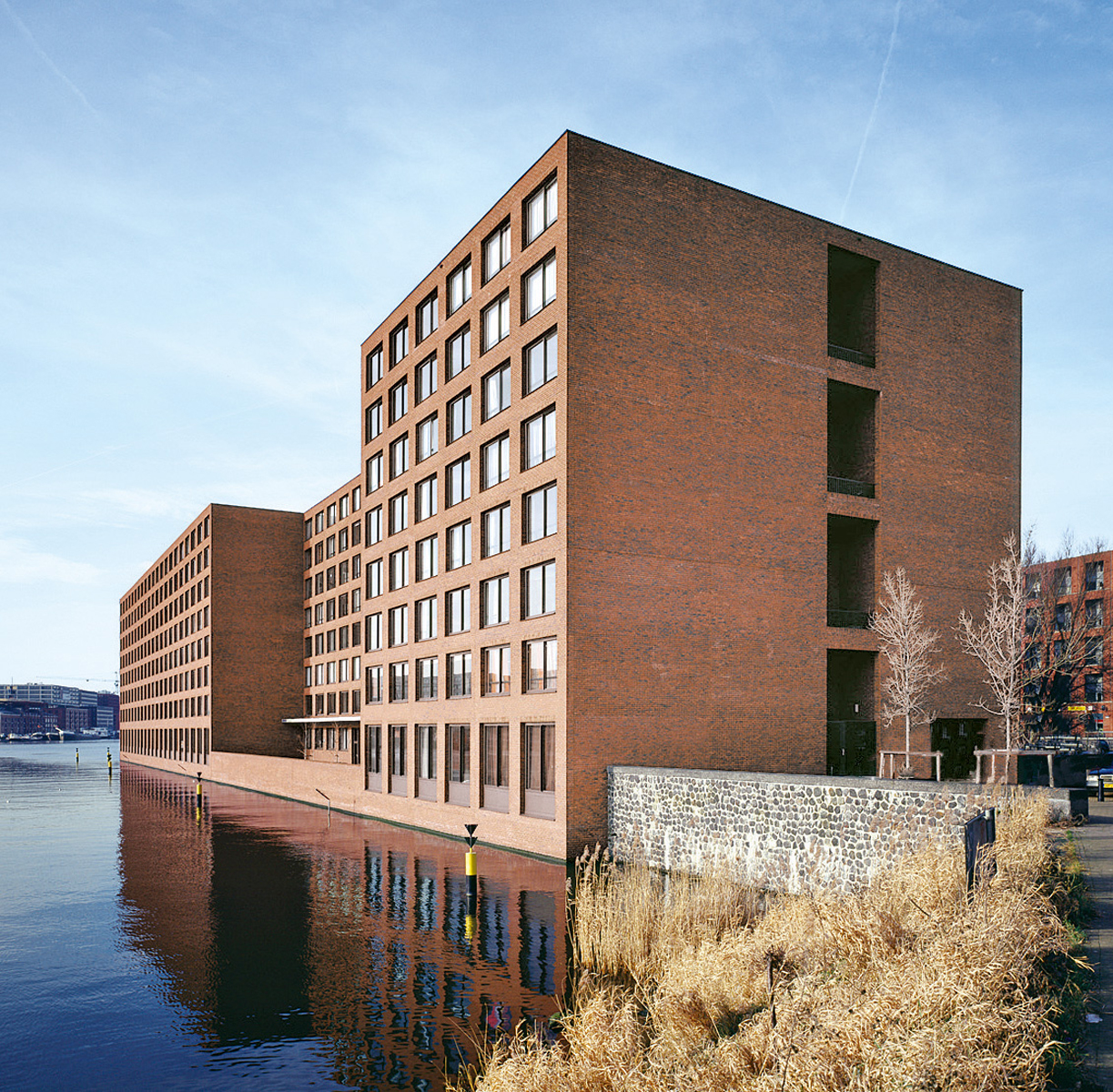 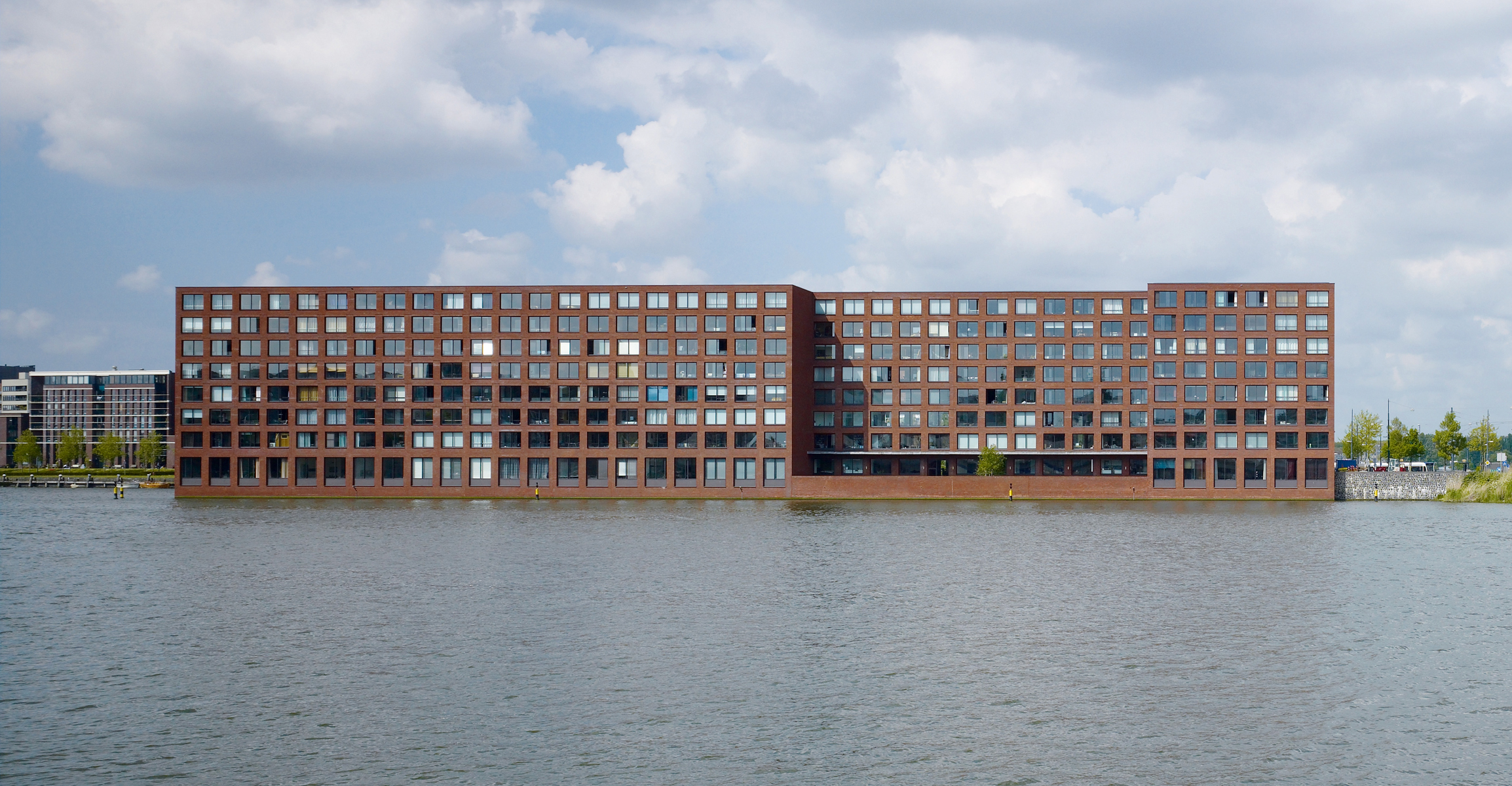 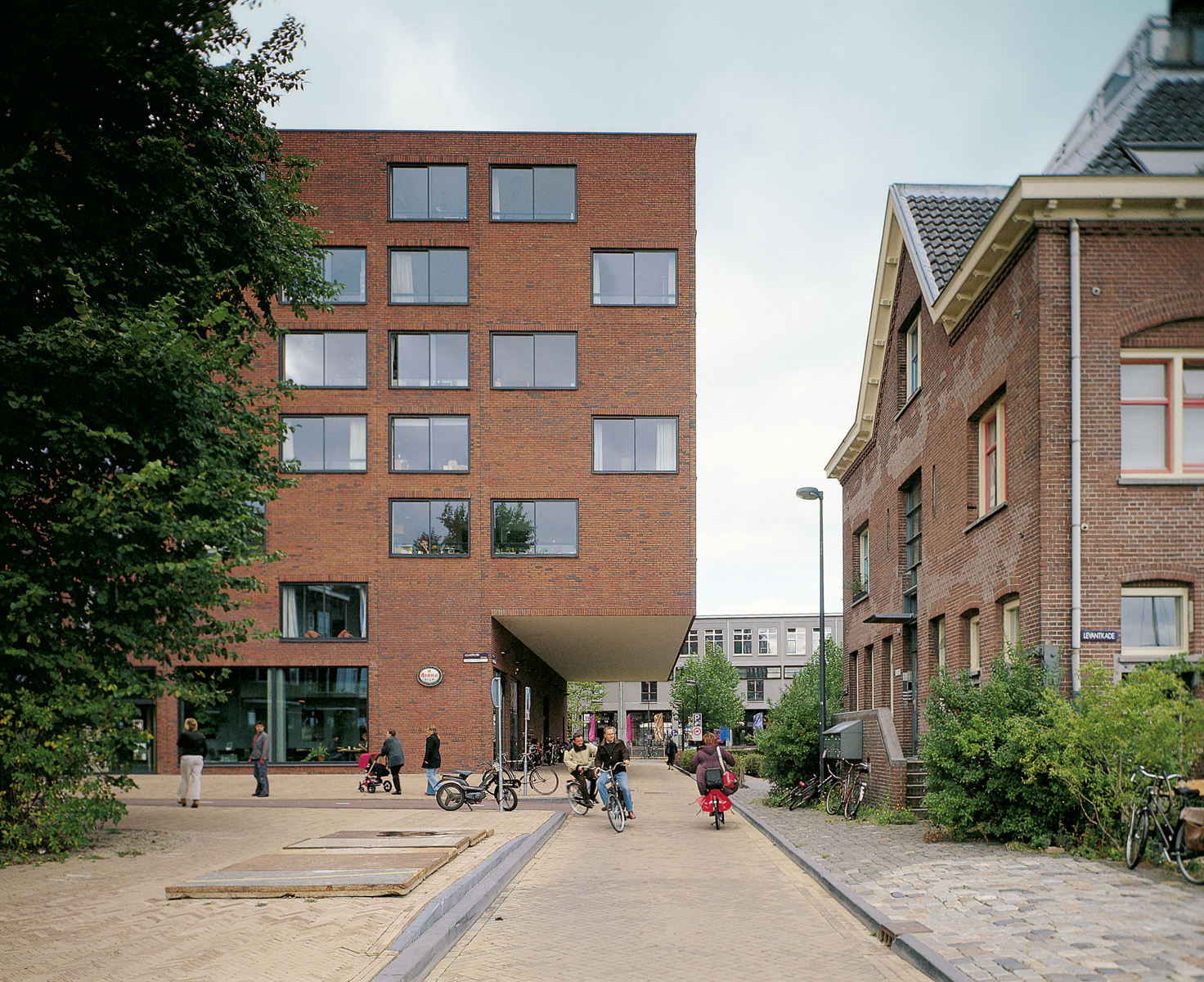 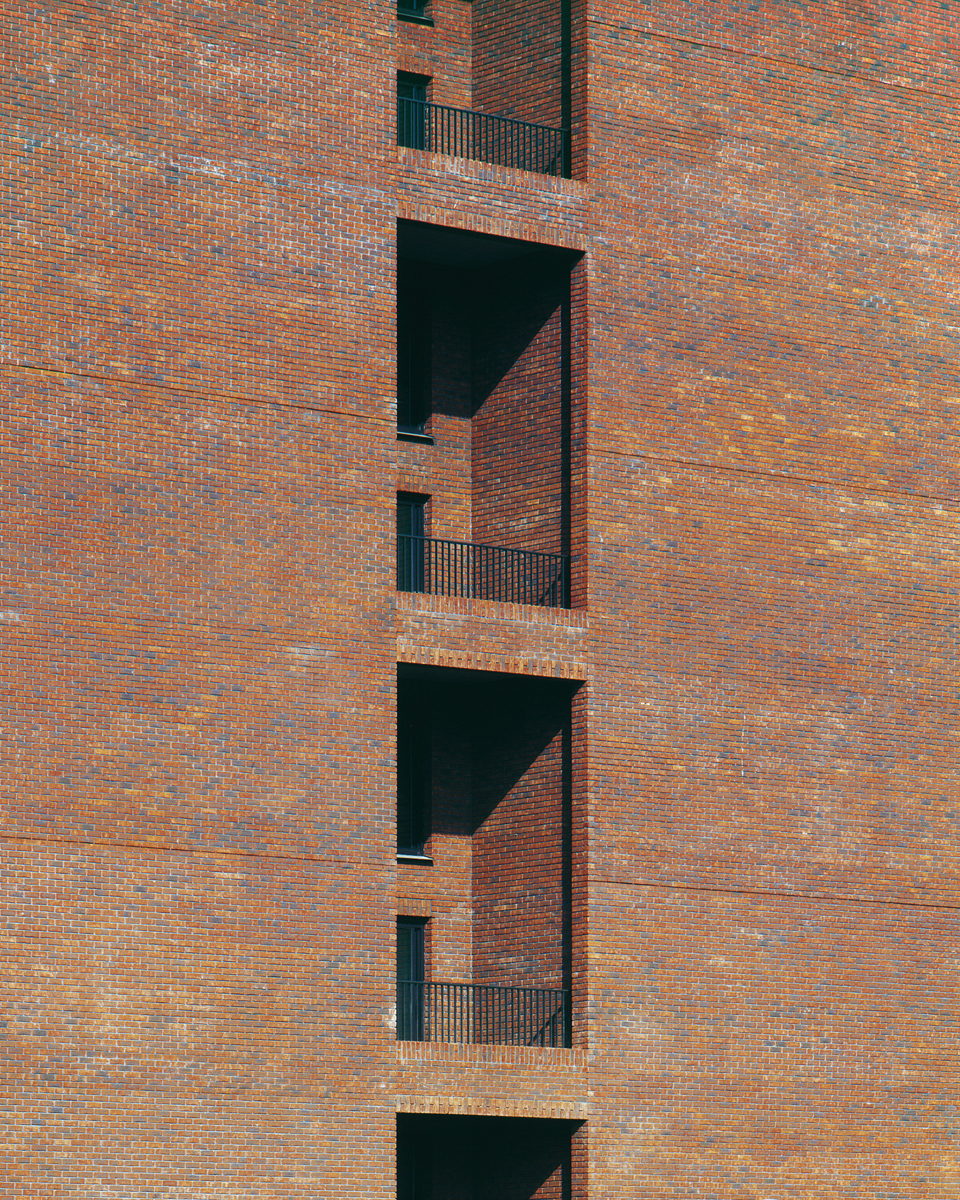 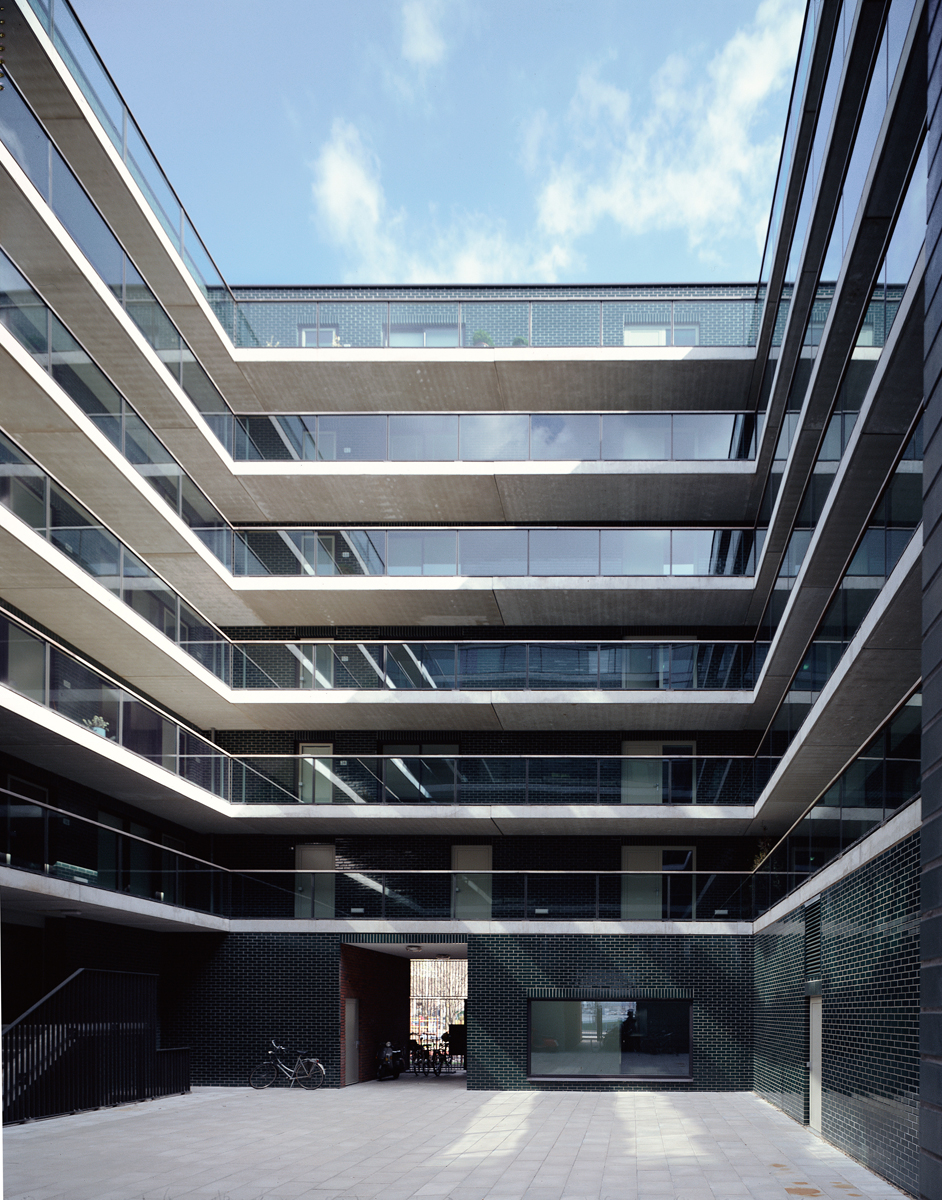 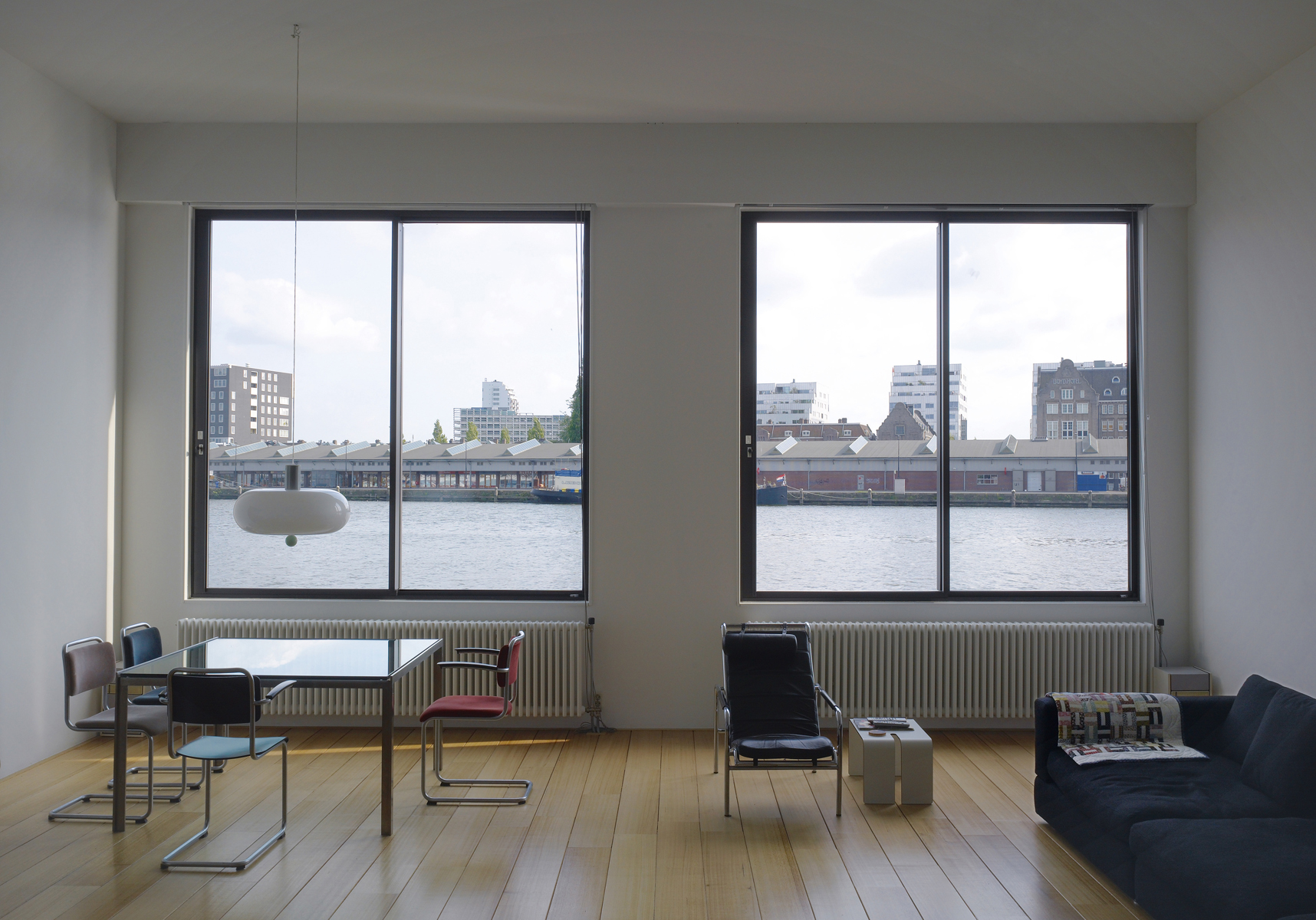