The Museum of Natural History stands at the center of a monumental urban ensemble on the Invalidenstrasse in Berlin Mitte. It was designed by August Tiede and built between 1875 and 1889. From 1914 to 1917, a cross wing was added to the building’s original three wings. However, in the Second World War, a firebomb destroyed the east wing and reduced the original façade to fragments. For many decades, the building remained a ruin. Work on reconstructing the building only started in 2006, after a ten-year planning period and it was only in 2010 that the east wing finally opened to public again. The project received the DAM Award for Architecture in Germany in 2012.

The Natural History Museum houses one of Germany’s largest natural history collections and is a site for scientific research. Outside general visiting hours periodic tours of the building and the collection provide insight to the research activities, thereby continuing a mindset imbued in the museum’s initial structure. The concept underlying the east wing’s reconstruction respects this structure with its walkable archive, making it both accessible to an interested public while providing ideal conditions for scientific research. As a result, the museum’s famous wet collection, animal specimens preserved in jars of formaldehyde, remains visible from all sides. The laboratories and the rooms for the staff managing the wet collection are located in the floor above and below. This radical concentration of research and public viewing means that the reconstructed east wing once again encourages the close association of collecting and researching.

The main floors of the museum extend into the new wing. The shelves for the wet collection hold 276’000 animal specimens preserved in alcohol filled glass jars. The building itself has no windows, thereby ensuring the safe preservation of these light-sensitive animal specimens. The 18m high storage facility is structurally braced with the entire surrounding building. The walkways allow the storage system to remain compact and ensure easy access to the specimens. The viewing area for general visitors is located on the first floor and consists of a circular passageway with supervised access that is 6m high and 1.95m wide. Leonhard Forslund specifically developed the wall color, “caput mortuum,” for this room. Its purple-red color tone gives the amber yellow of the glass specimen jars a greater luminosity.

The new east wing consists of a homogenous cement shell. To construct this shell, silicon molds were made of the original façade elements and cast in cement. The precast cement elements were then used to fill the destroyed gaps in the façade. These new façade elements have blind windows made of cement, while the window openings in the old façade segments are bricked up. As a result, the sealed building shell fulfills the high physical and technical requirements when storing wet collections and allows the ideal maintenance of temperature and humidity.

The façade’s reconstructed segments continue the modulations that are evident in the original architecture while the cement’s gray color clearly sets these reconstructed elements apart from the preserved original segments of the building. The brickwork, the cut stone, as well as the wall structure merely exist as the representation of an imprint. The new building does not fill the voids in the original monument as a reconstruction, but as a performance of history. The cement relief conveys the impression of the original façade without faithfully repeating it. History is preserved as an imprint of what it once was. 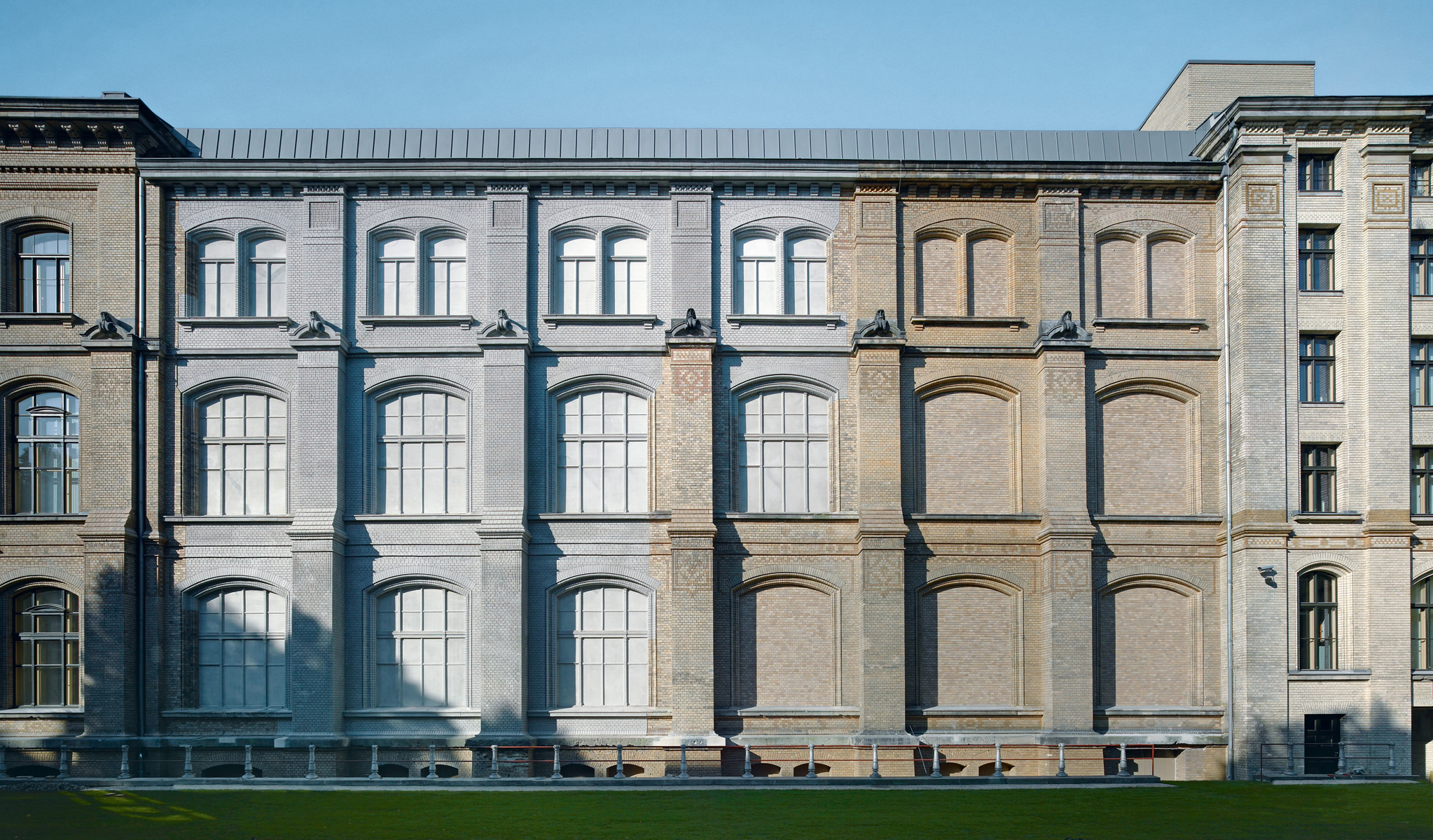 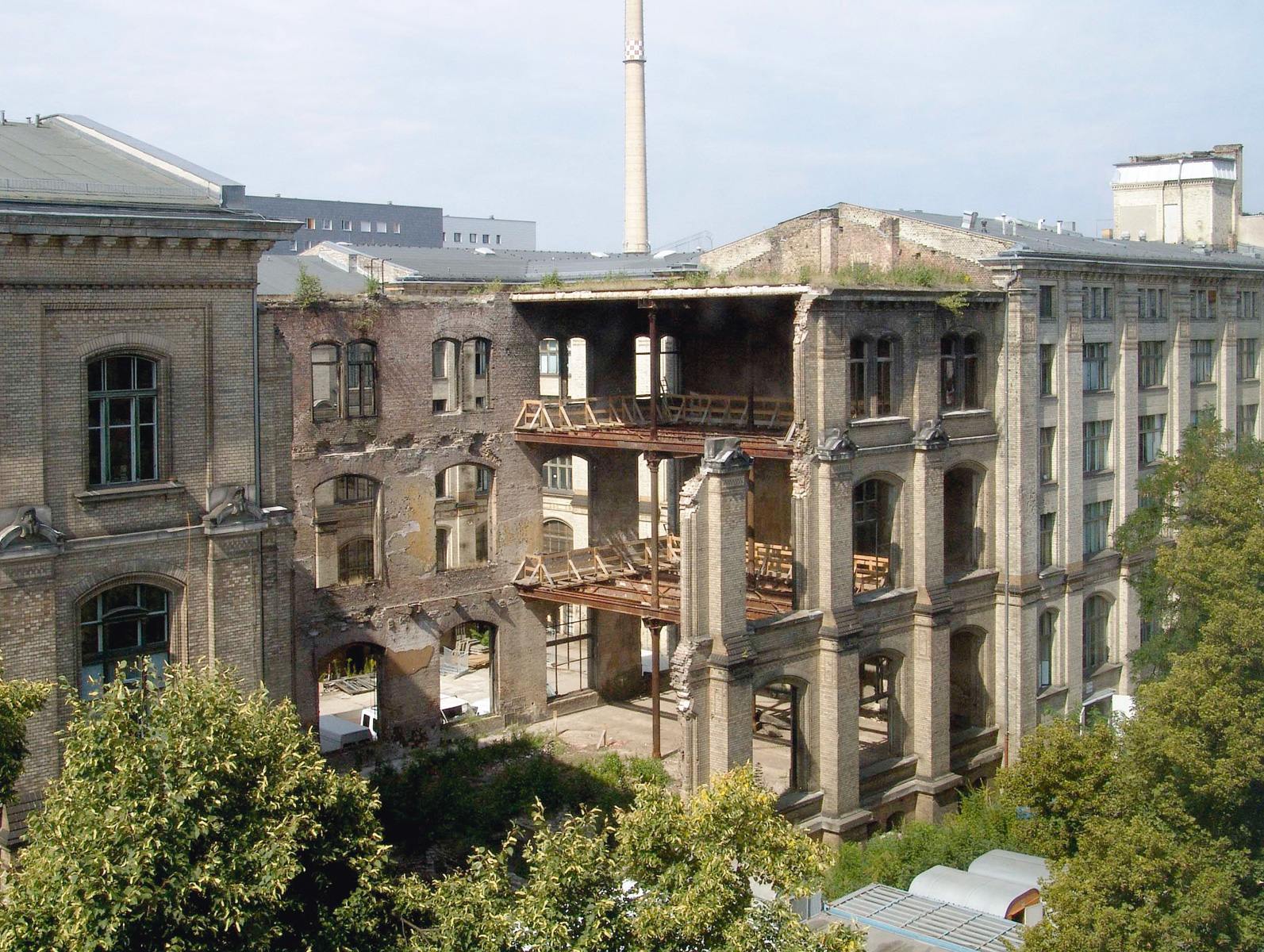 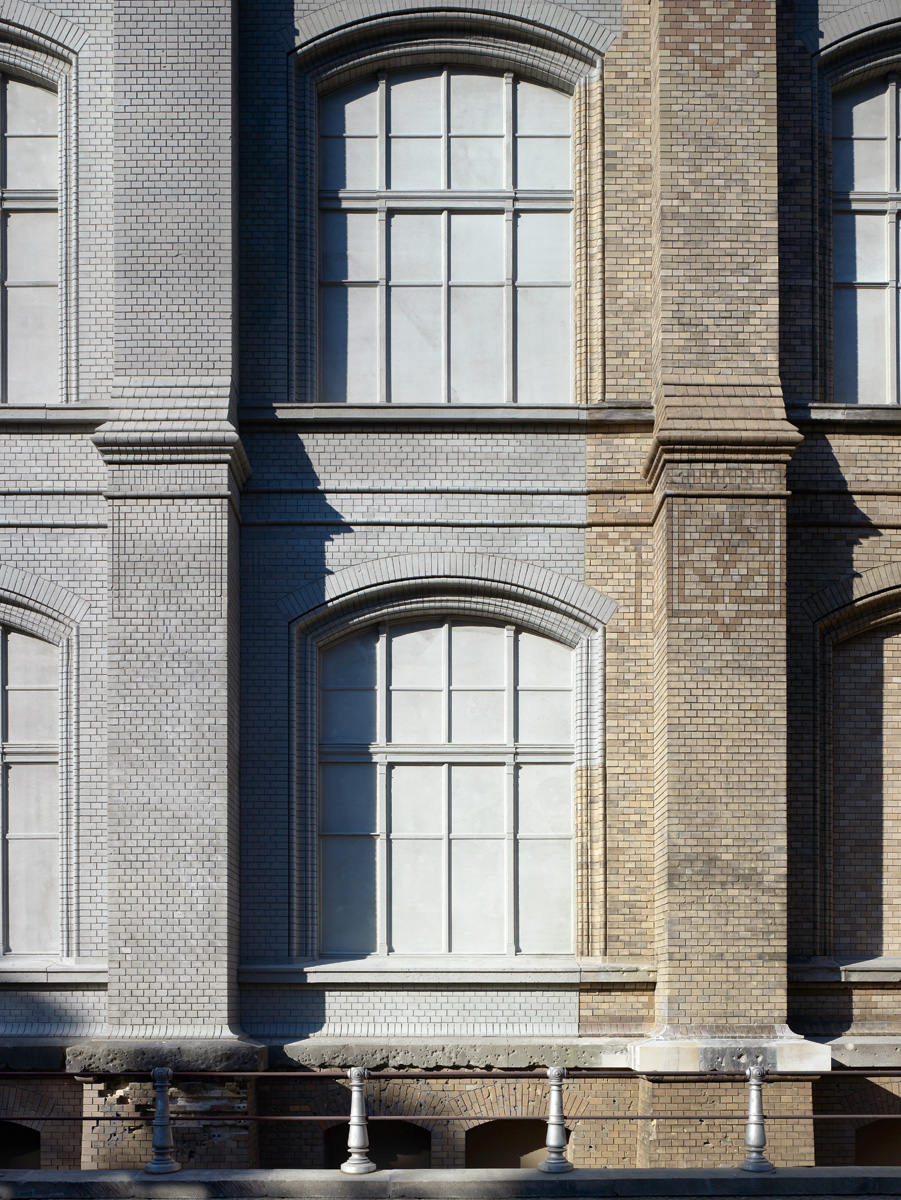 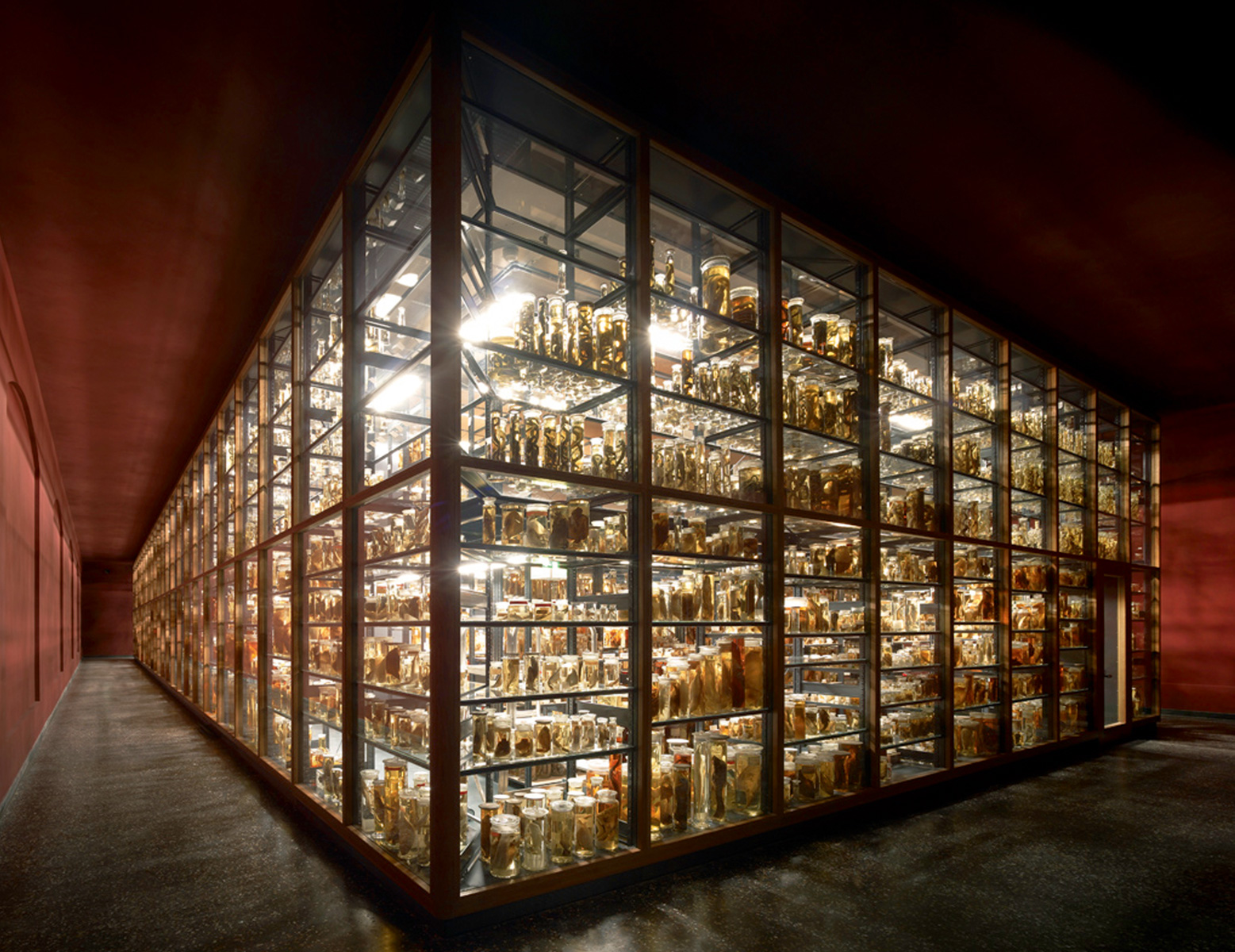 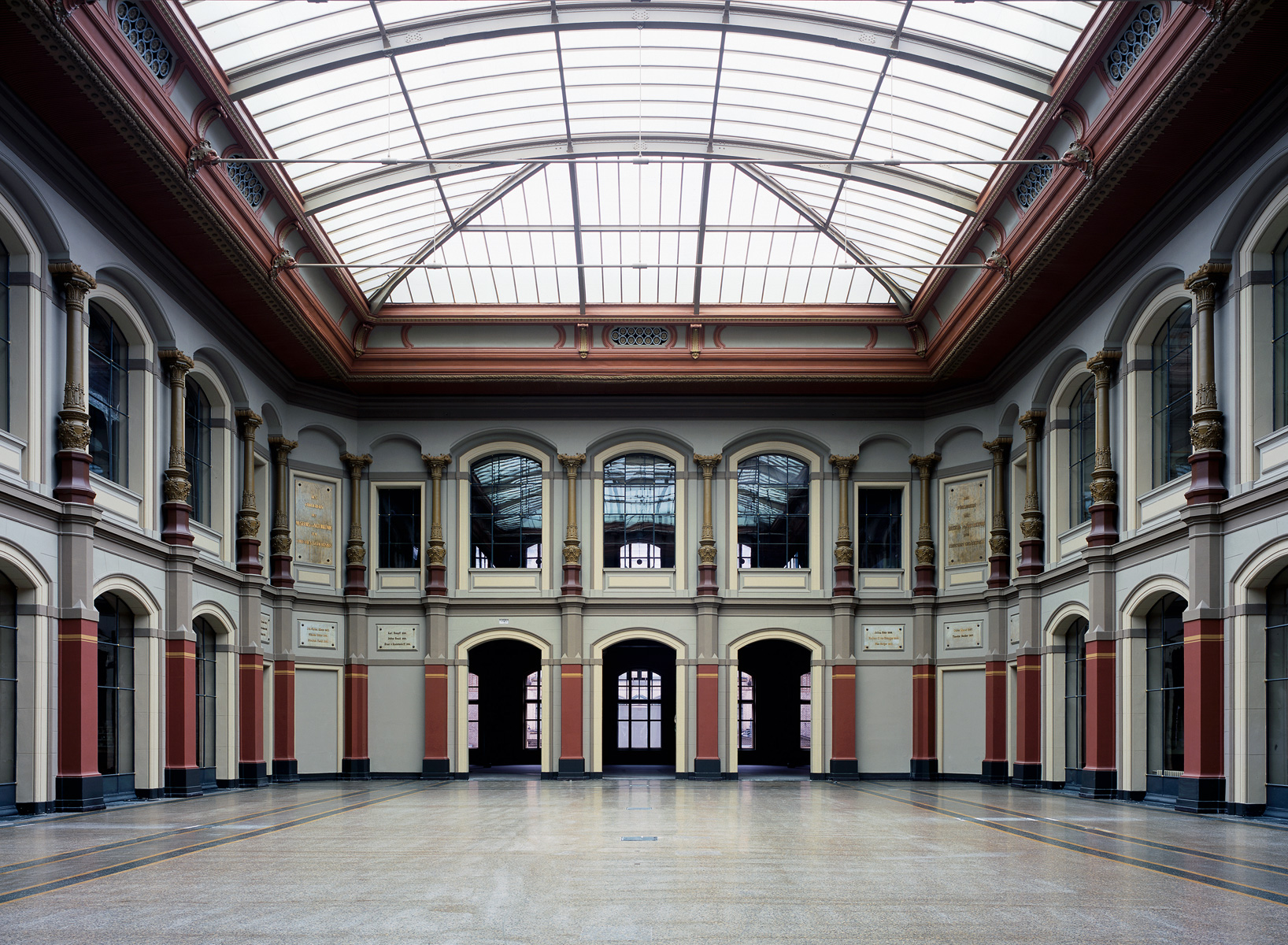