Novartis’ headquarters is located on the main square (forum) where it forms a compact and expressive gateway onto Novartis Campus. The campus adheres to the master plan as designed by Vittorio Magnano Lampugnani. It unites all the office buildings and the research and production sites in single place. The headquarters, the first of the new buildings to be completed, stands in marked contrast to the previous, stone-built headquarters. It is the most important programmatic building, serving to make manifest the company’s ties to its location and history.

The five-story building was design in collaboration with artist Helmut Federle and architect Gerold Wiederin. The floors facing the forum on the buildings long side jut out over the first-floor to create a covered space. On the first-floor, the sliding windows reach from floor to ceiling and allow the rooms to be opened up completely to this covered space. This gives the foyer a decidedly public character. Foyer and reception area, café and restaurant, as well as a large conference room are all located on the first-floor. The offices on the upper floors are designed as open-space offices and include secluded zones and meeting rooms. A curved dark walnut staircase joins the upper floors and provides a distinctly sculptural, vertical accent that stands in marked contrast to the office’s fluid landscape both in terms of form and material. The building’s west wing has an indoor garden extending to the ceiling that provides another contrasting accent. The garden introduces the irregular structures of natural growth into the strictly organized architecture of the office workspace and offers a place of rest in its bustling environment. The tropical trees and plants evoke the staged exoticism of the initial World’s  Expositions or the atmosphere found in glasshouses; its also opens up the building’s enclosed office spaces and the campus as a whole to the neighboring public park with its Central European vegetation.

The building is a longitudinal cuboid. Its core shape is derived from the multilayered façade made up of layered sheets of colored glass. This is the building’s undisputed visual attraction. This semi-transparent decorative glass veil mediates between the internal and the external space. It captures and refracts the light and redirects it into the open spaces. The unframed panes of glass are mounted on rods and attached to the floor plates by consoles. They are both part of and apart from the architecture, existing as a separate element that adheres strictly to artistic rules. Accordingly, the layered panes of colored glass do not only interact intensely with the light entering the building, they also play on the observer’s point of view. As the observer moves around the building, the layers of glass shift and change, giving the façade a dynamic and transformative quality: it encloses the building in what amounts to an immaterial container.

The façade, designed by Helmut Federle, transposes the overlay structure characteristic of his paintings and drawings and introduces it to the architectural dimension. Additionally, the color variety calls to mind the company’s origins in Basel, where it began with the production of dyes. “In the end, the play between the panes of colored glass reflects the endless processes associated with the ongoing research pursued at this location and forms a relationship with the diverse, near limitless web of work, creative energies, and encounters.” (Roger Diener) 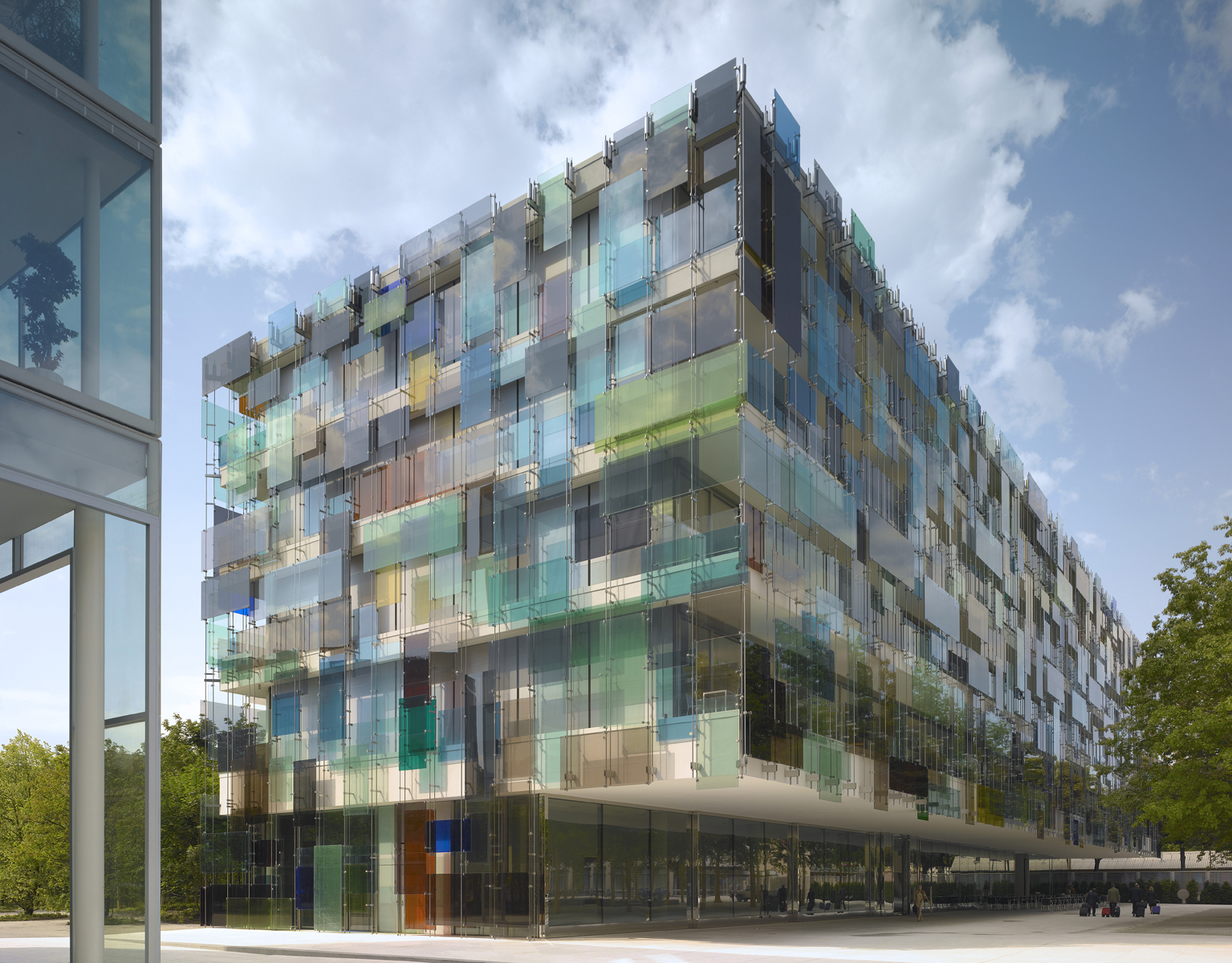 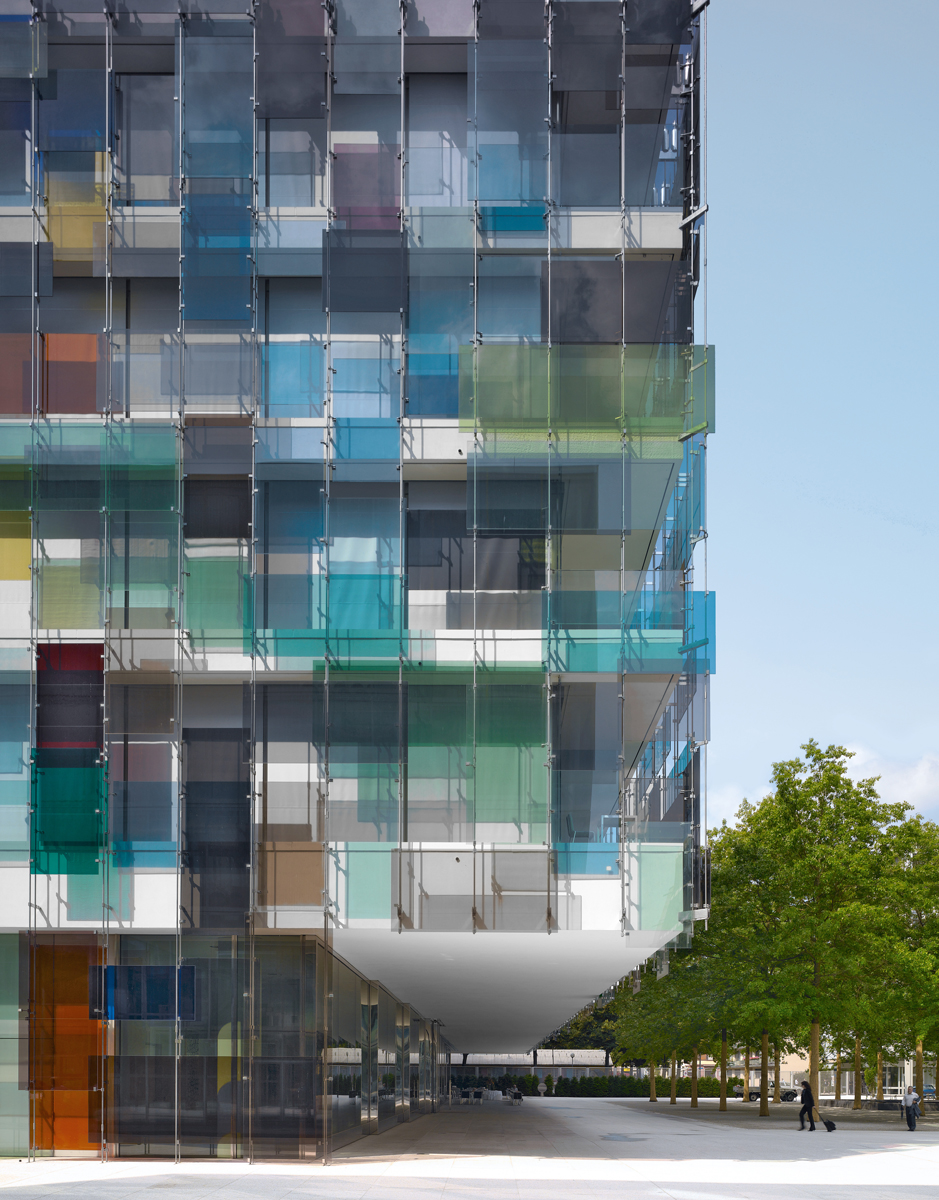 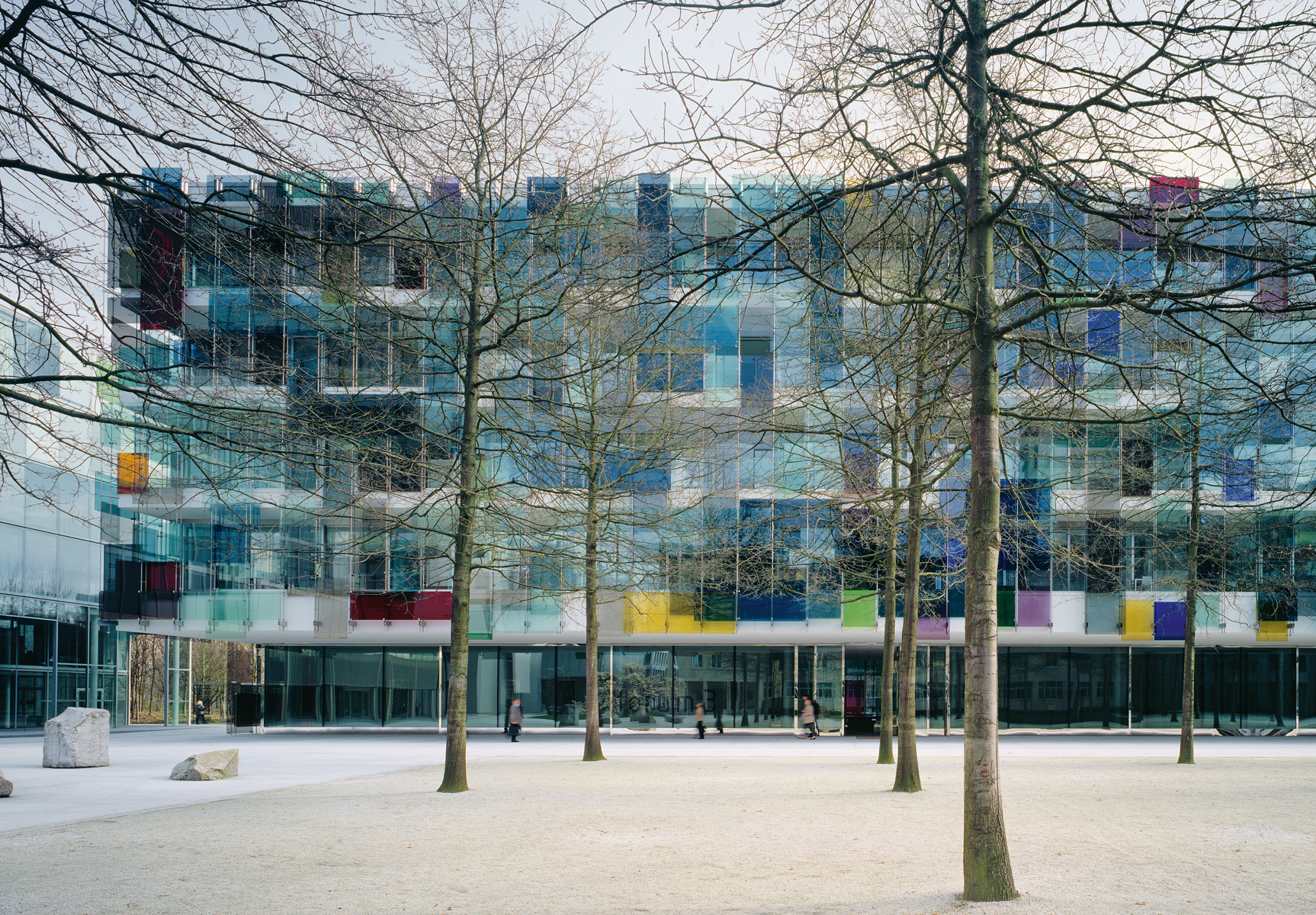 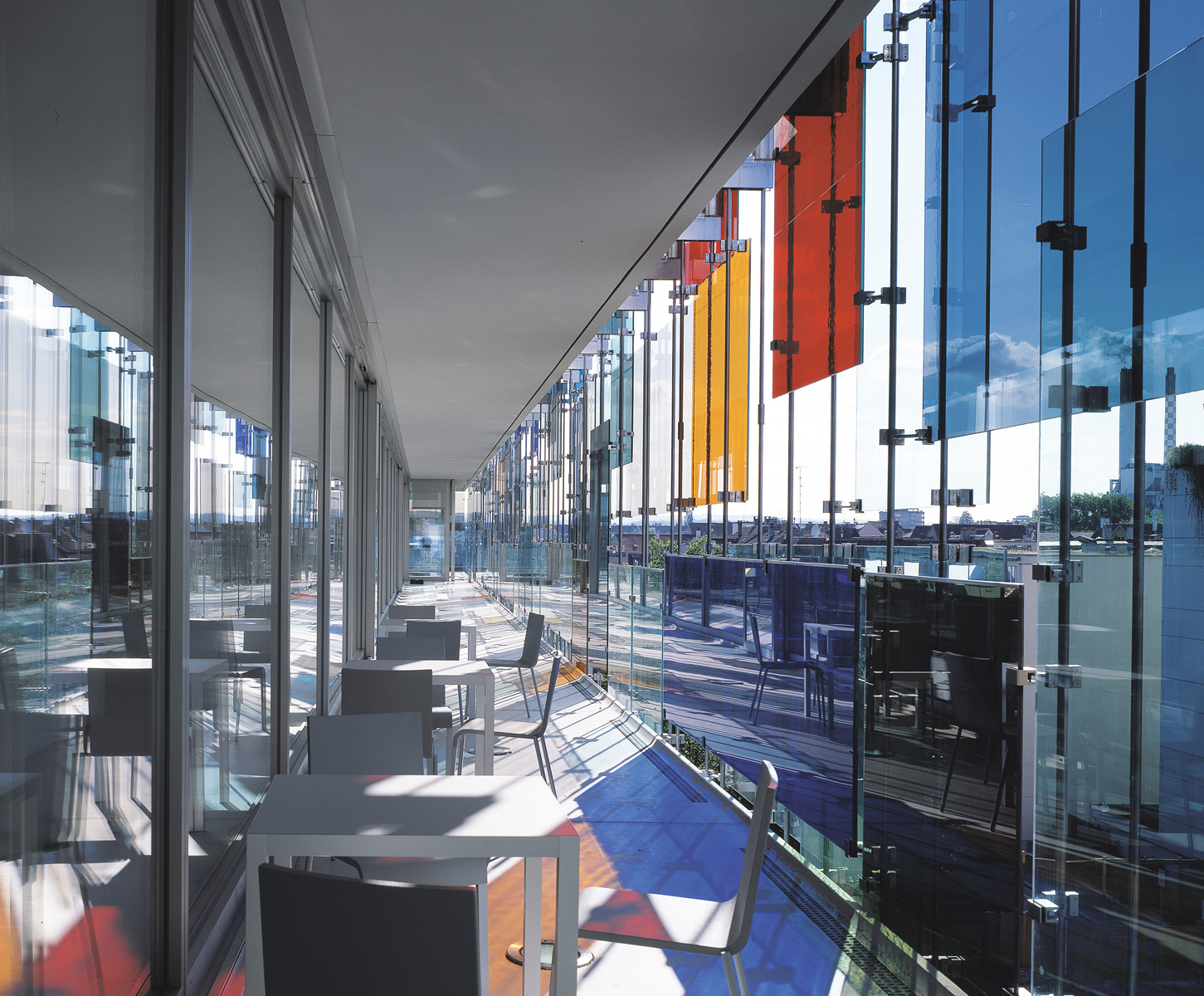 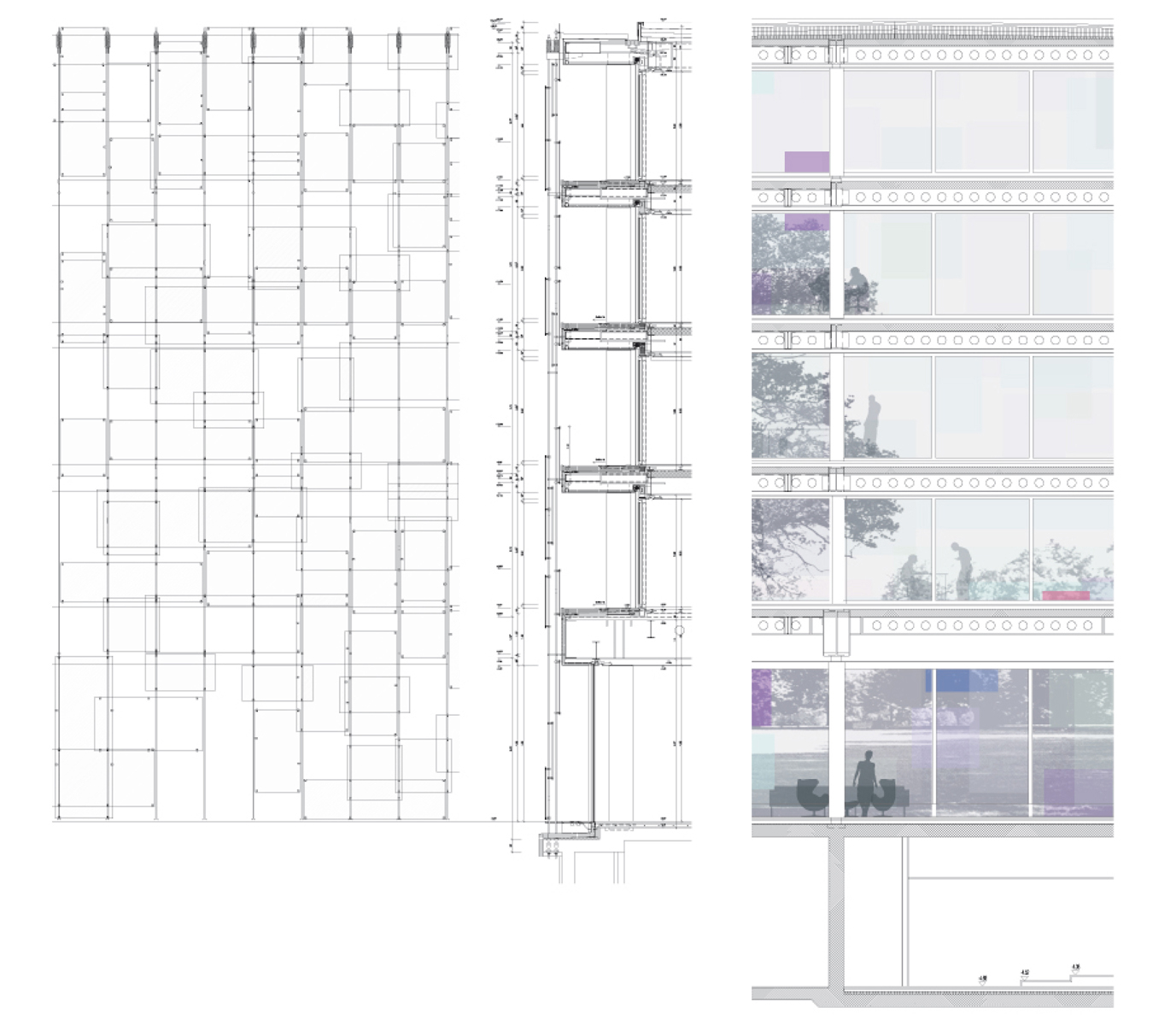 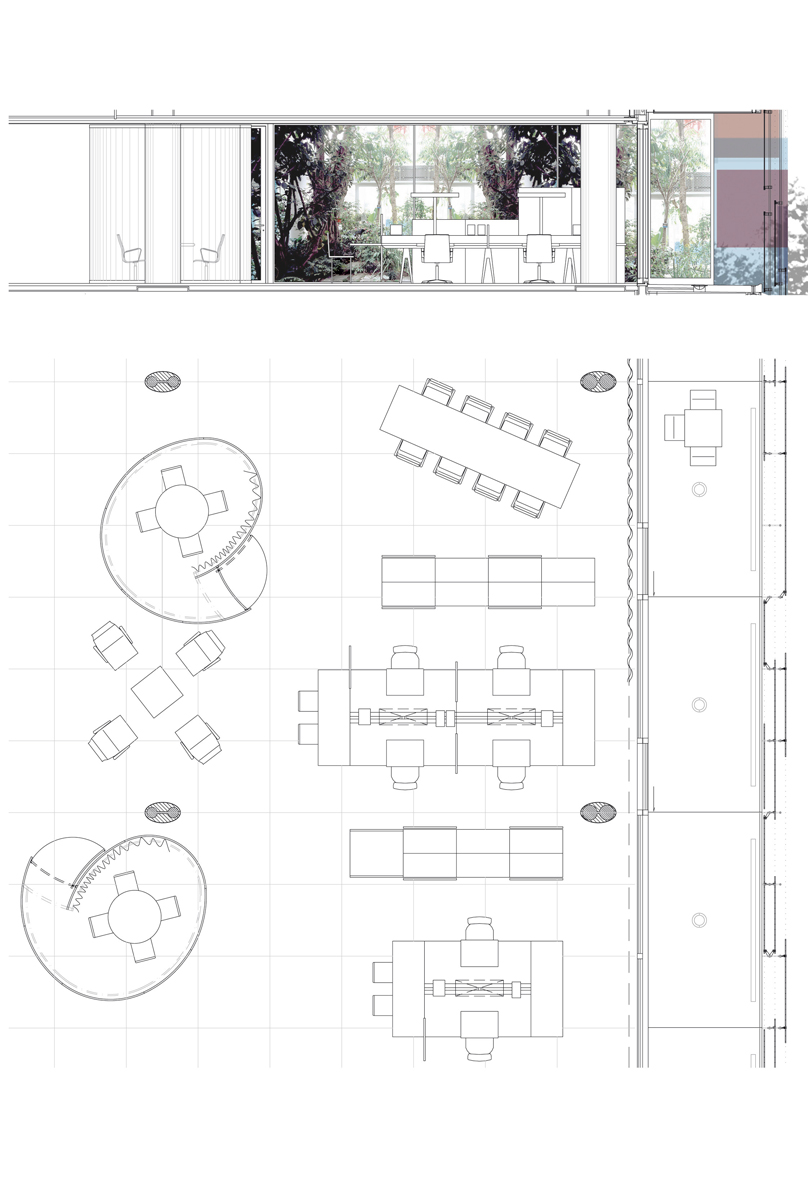 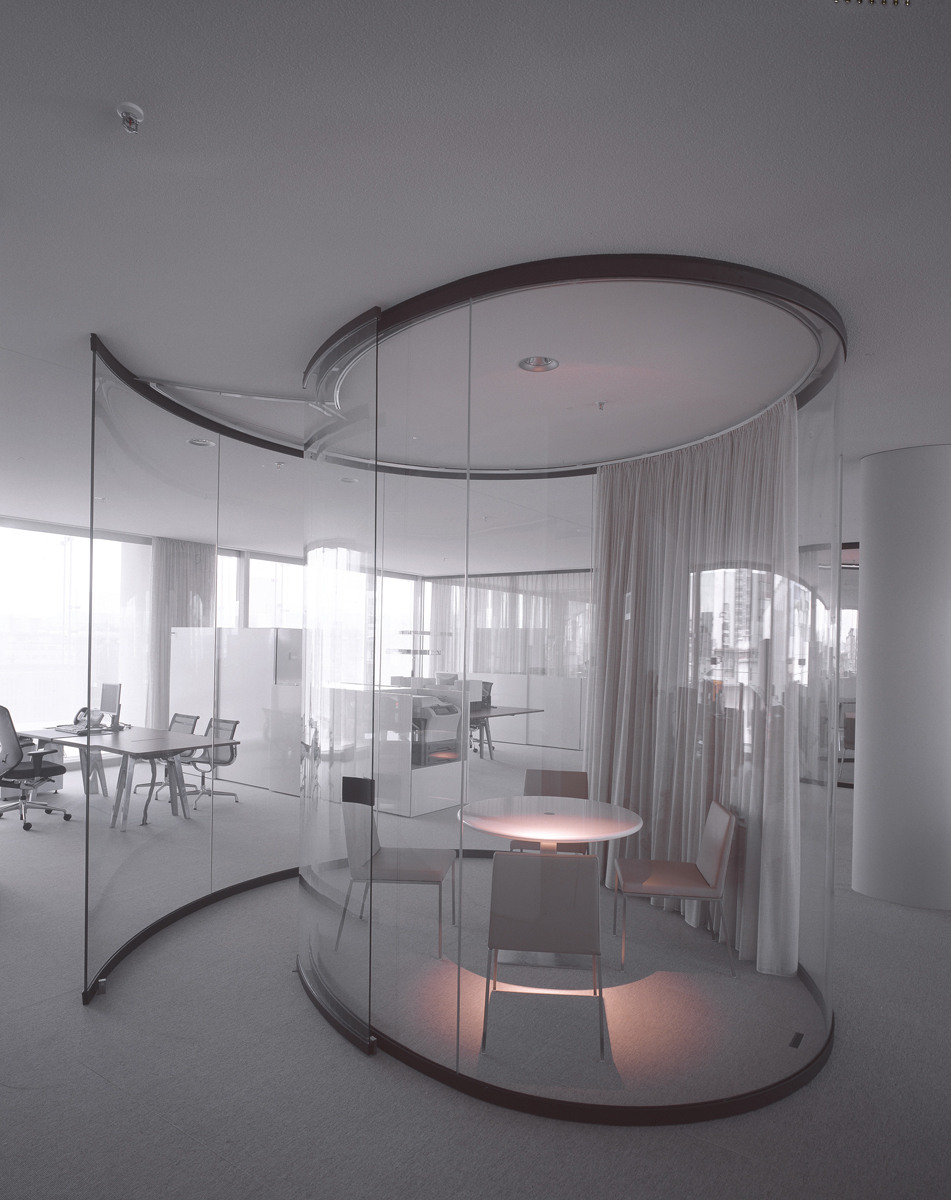 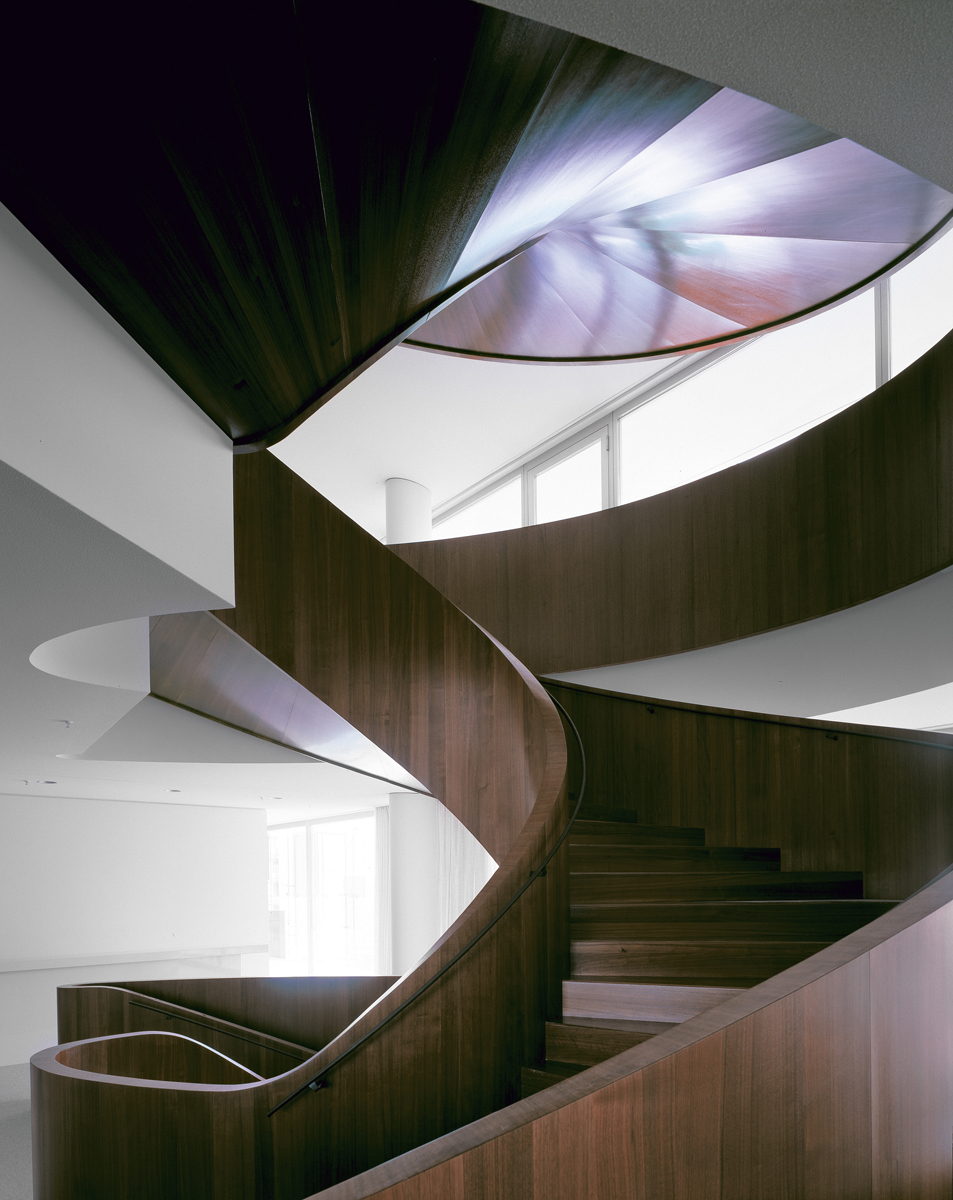 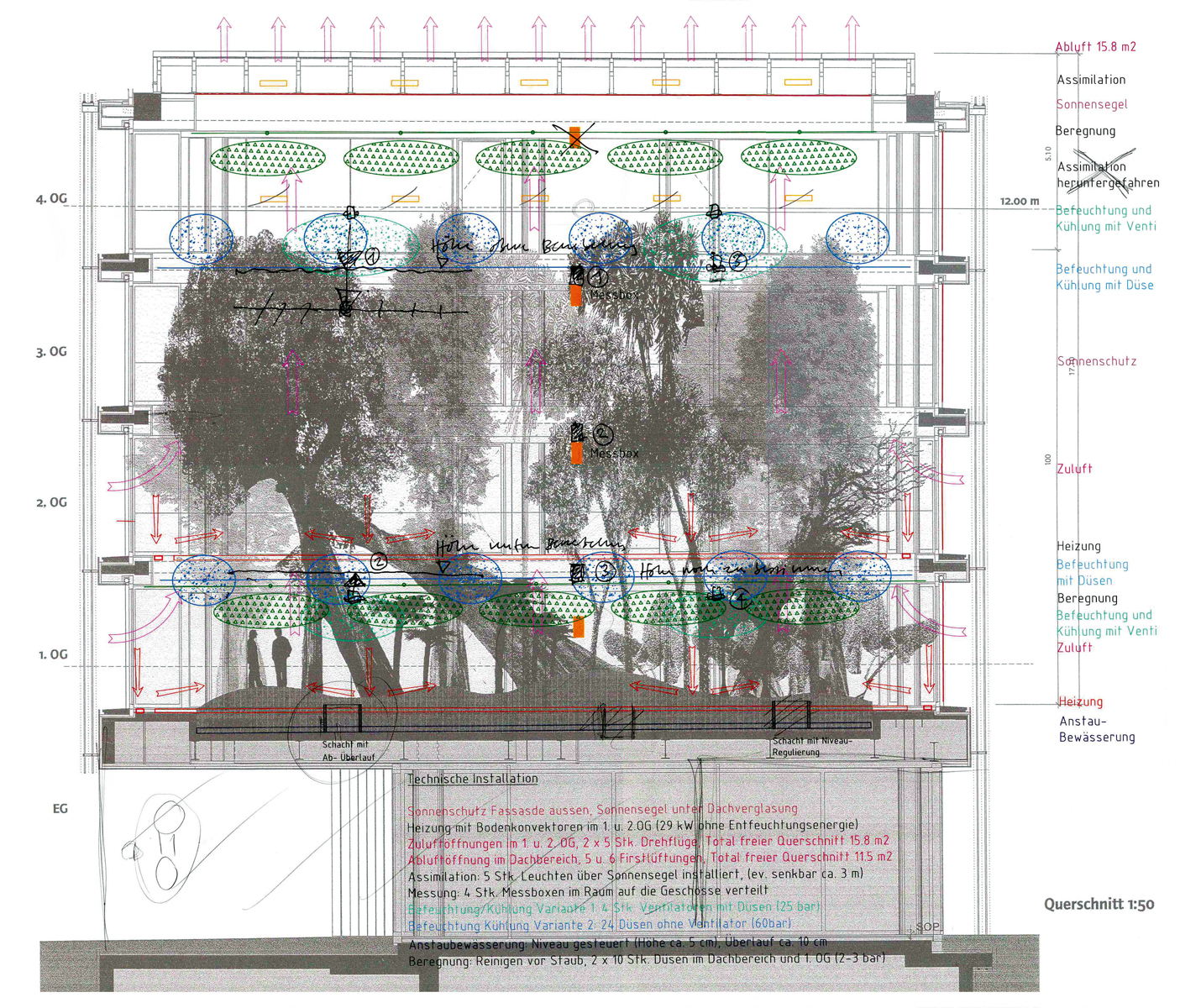 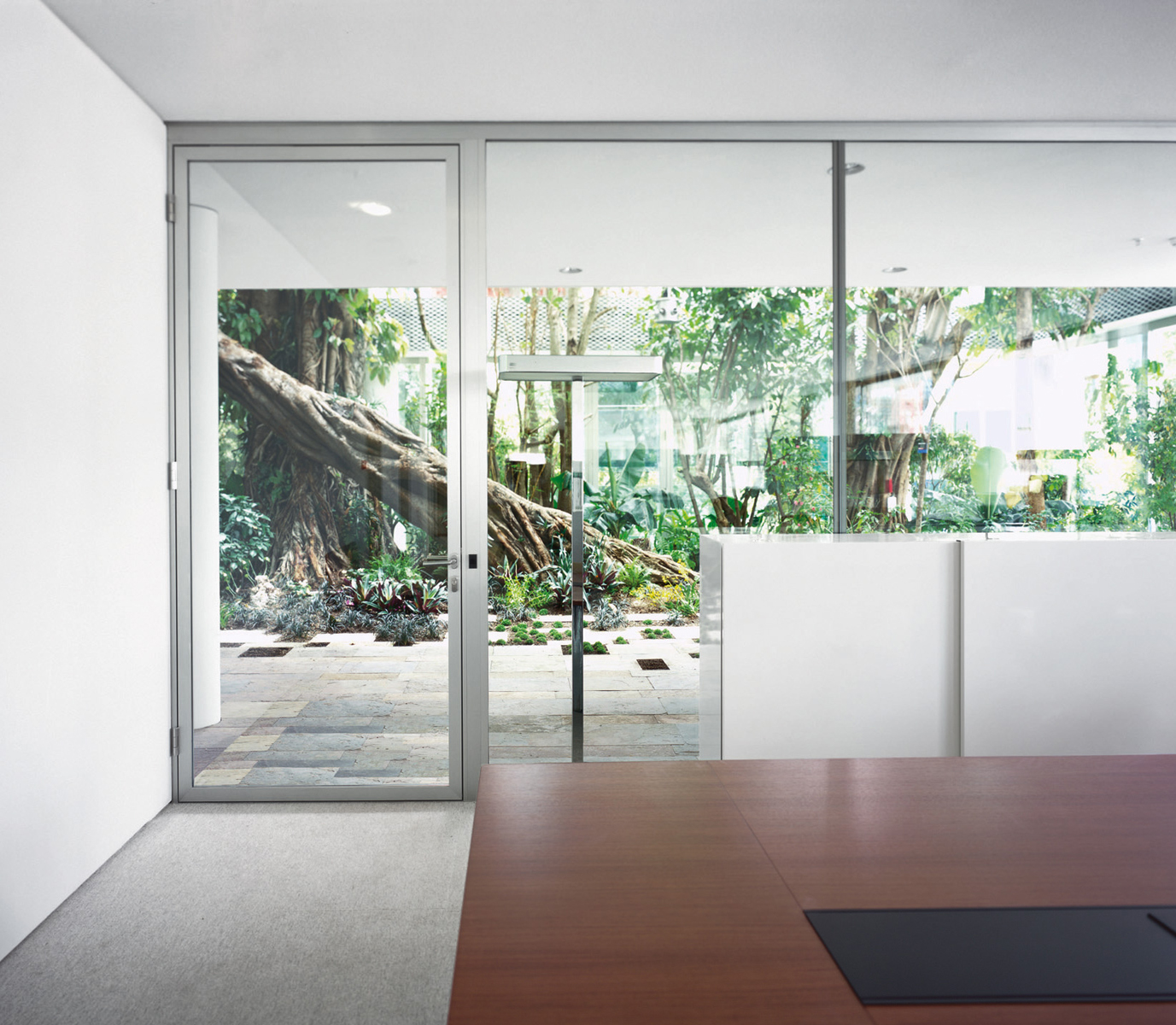 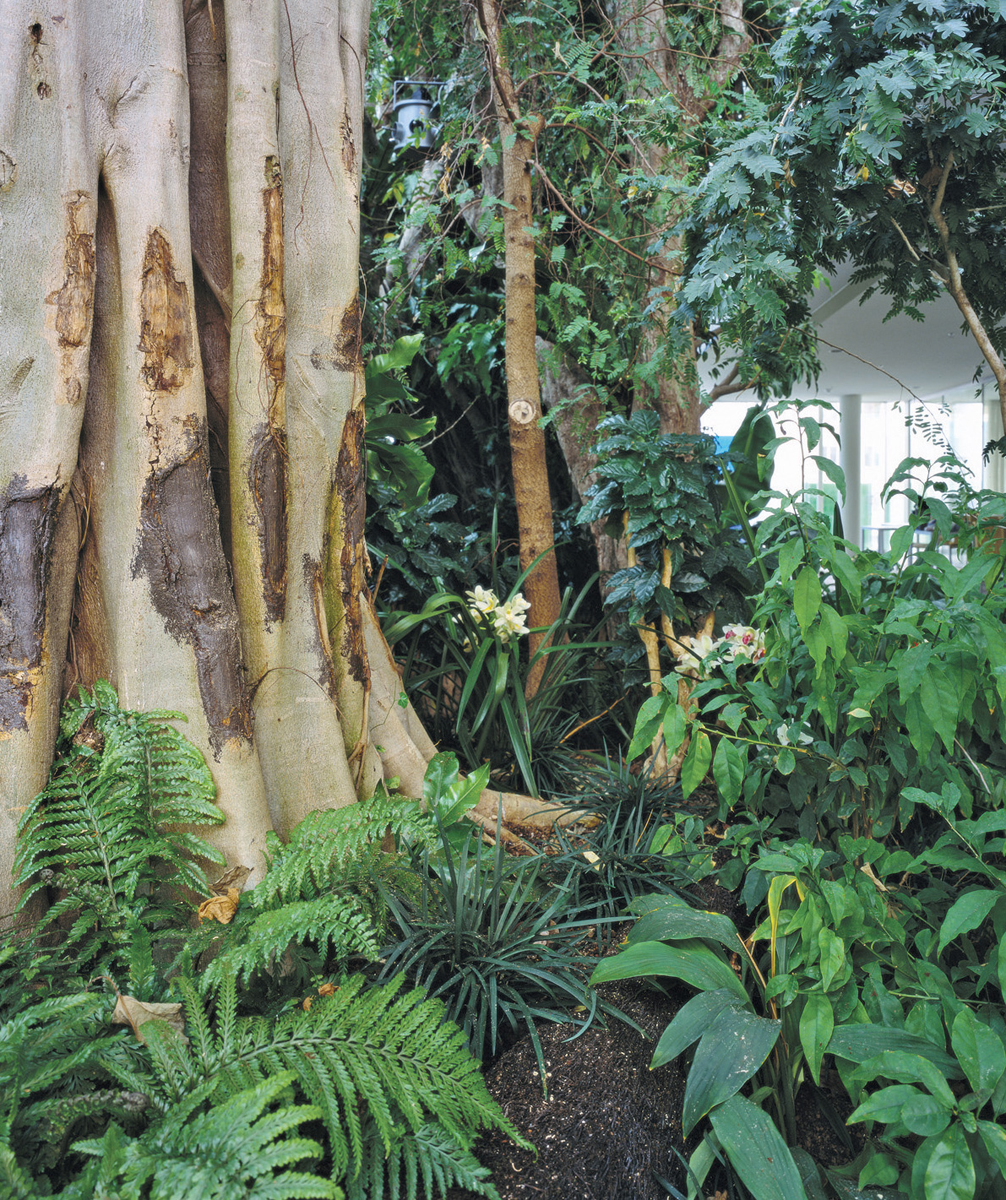