The family-run business Oettinger Davidoff AG is opening a new headquarters on Nauenstrasse 73, near Basel’s Central Station. The new building replaces the company’s former headquarters, built at the same location in 1930. The old structure, renovated and redesigned a number of times over the years, could no longer meet the needs of Maison Davidoff. The new building will provide seven storeys of office space and reception rooms linked together by stairways and elevators. Its unique shell creates an entirely new set of premises for the work being done at Oettinger Davidoff’s Basel headquarters.

Situated on Nauenstrasse, one of Basel’s main traffic hubs, it was important that the new headquarters have a shielding, screening quality. But at the same time, surrounded by a variety of well-built, yet somewhat forbidding and cold-seeming office buildings, the new structure needed to express Davidoff’s welcoming culture in this corner of the urban fabric.

Maison Davidoff is conceived as an elongated, multilevel hall with an attic storey that stretches along the street and swings around the edge of the plot. The unusual design of this simple underlying form is created through the sculptural contours and arrangement of its prefabricated load-bearing columns, made of glazed reinforced concrete. Like figures in a choir standing at regular intervals, the columns encircle the interior spaces, each furnished to suit their different functions. From the outside, the individual figures of the columns present themselves as a cohesive, interconnected group, a series that lends the urban space new visibility.  The individual columns, like the group as a whole, also address themselves toward the interior of the building, becoming the first thing you see when you peer out toward a neighbouring facade or into the city’s greenery below.

An embedded garden area stretches down the back side of the 80-meter-long facade, hemmed in by a residential building on Lindenstrasse. The garden, with its trees and seating areas, was designed by the landscape design firm August Künzel Landschaftsarchitekten. On Nauenstrasse, a two-sided loggia separates the new building from its neighbour, giving echoes of its predecessor. Behind a gate, an open stairway leads to the garden. While the basic form of the new building conforms to the conditions imposed by the urban environment, it creates new horizontal and vertical networks within the structure. On both ends of the building, open-plan workspaces with window offices flow into outdoor areas that open into the surroundings thanks to the facade’s sculptural design.

The built envelope’s outer structure is based on the repetitive motif of the load-bearing columns, juxtaposed with the carefully modelled bands of storeys defined by railings and ledges. The play of light and shadow gives nuance to the volume, lending it more corporeality. The colour scheme of the loadbearing structure’s glazed reinforced concrete, as well as the precast floors, the metal frames that support the encircling windows, and the warm brown tones of the metal railings, give the building its own intense character. Unlike the Bank for International Settlements, a different big brown administrative building on Nauenstrasse, the new Maison Davidoff does not seem detached from the ground; its shell almost seems to be a reflection of the earth. Thus, despite its elegant urban allure, it maintains a connection with nature – a central aspect of the tobacco products manufactured by Oettinger Davidoff.

The round concrete columns taper off at the tops and bottoms. The bulbous shafts and the spaces between the columns function to divide the transparent facade on all sides. Only on the stepped-back attic storey is the series of columns relieved by a planted terrace.

The company’s employees and management share the same foyer and stairwell. Complementing the work areas are showrooms, cigar lounges, a cafeteria, and a car garage with 24 parking spots. 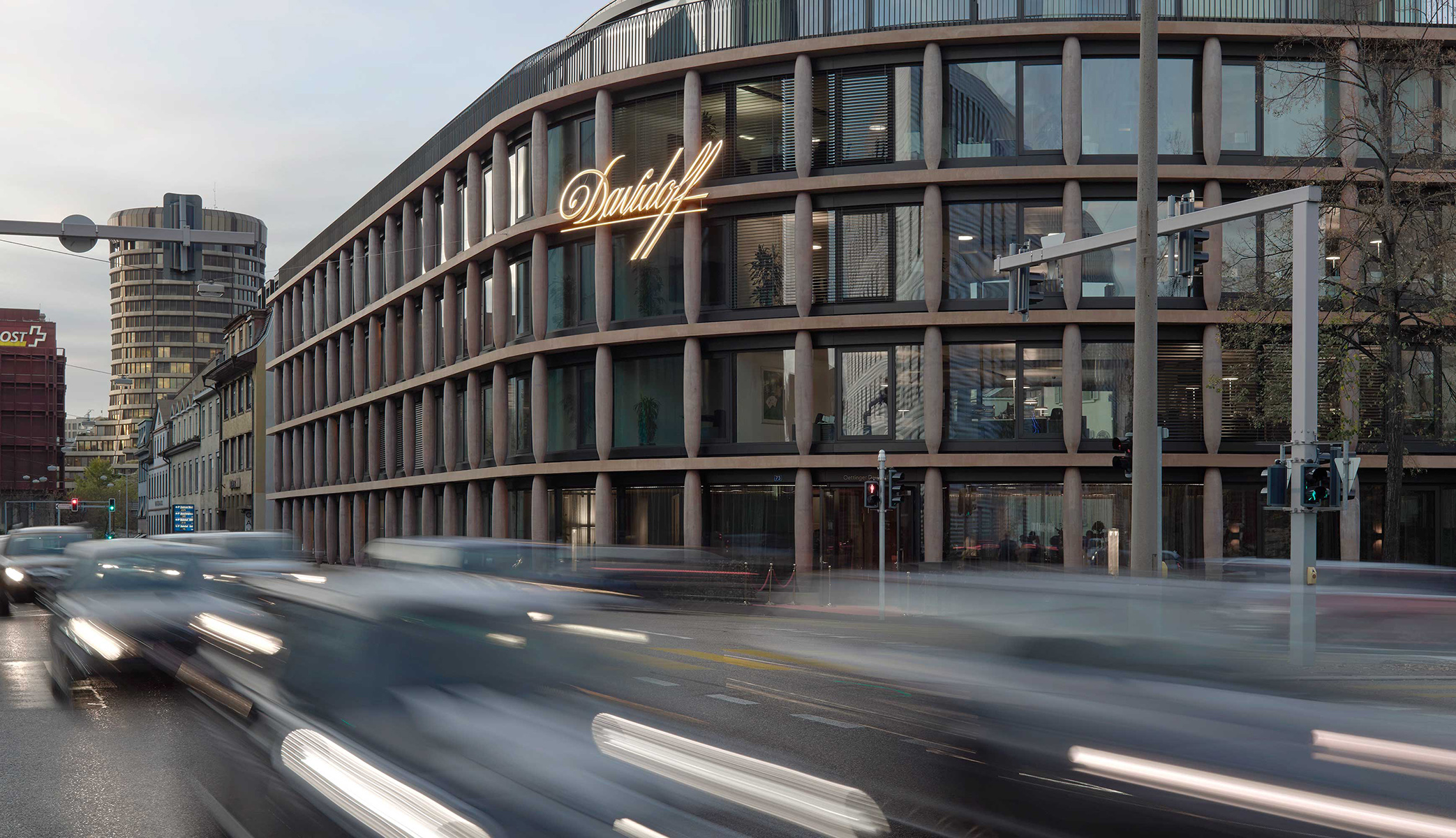 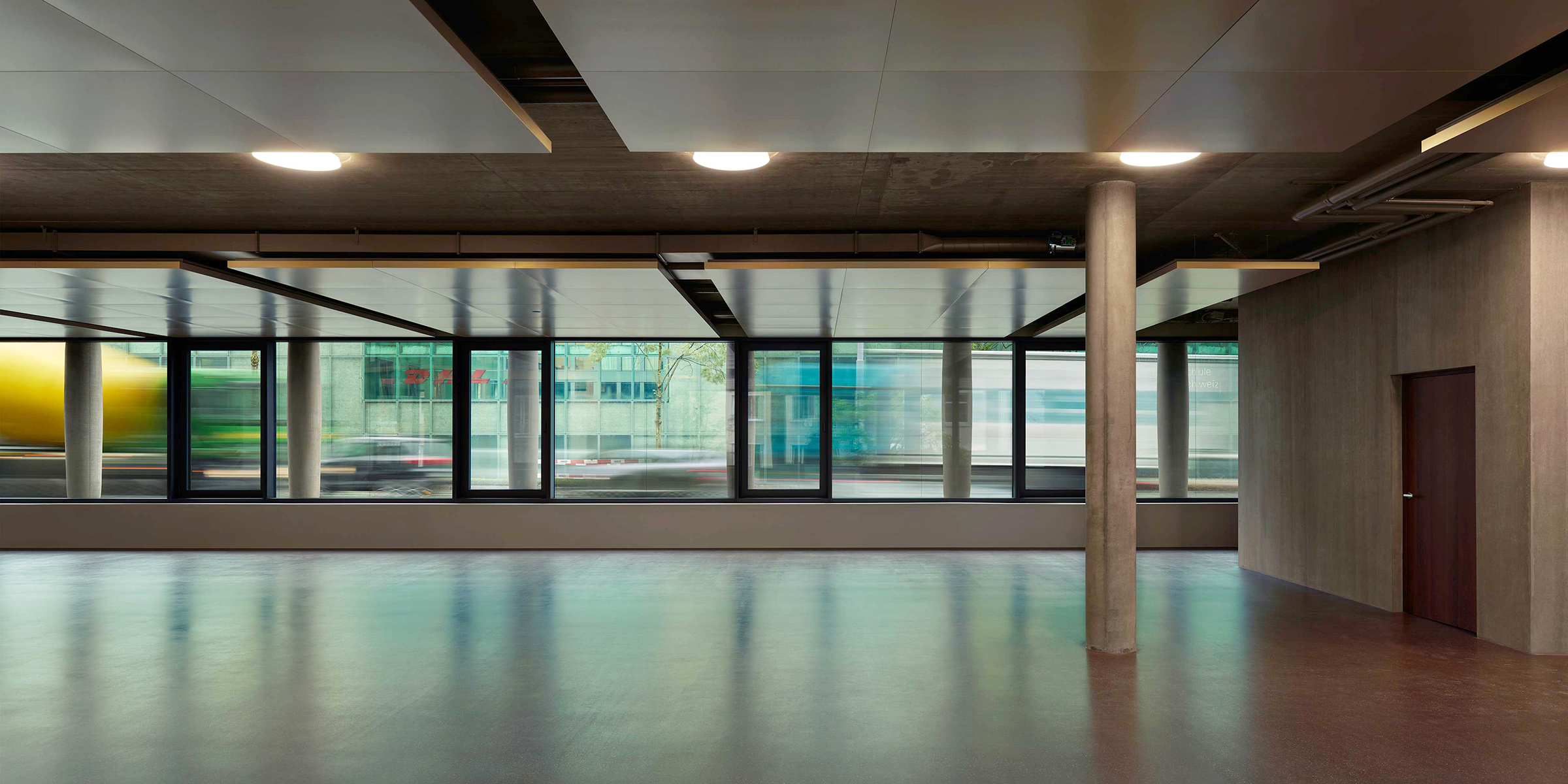 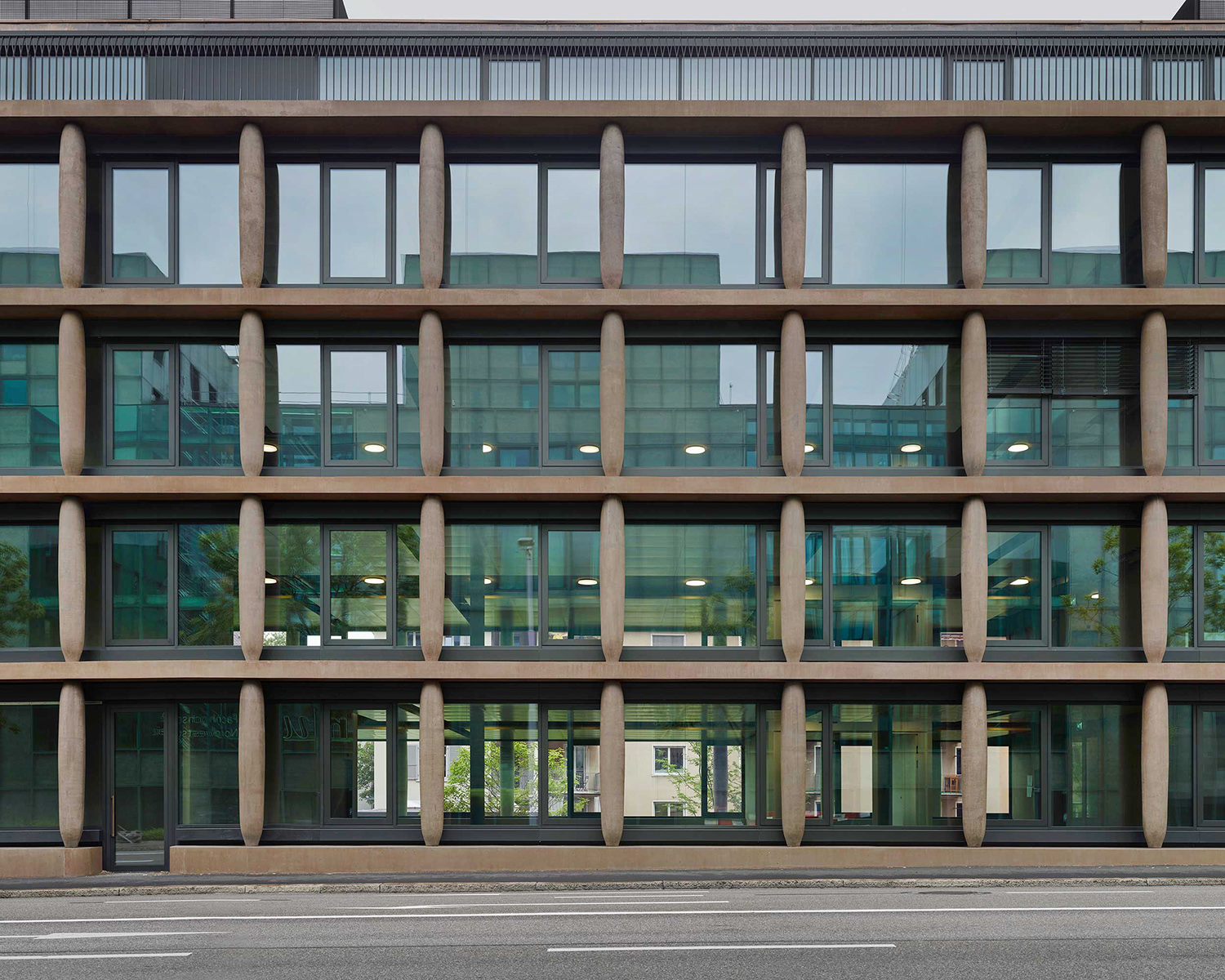 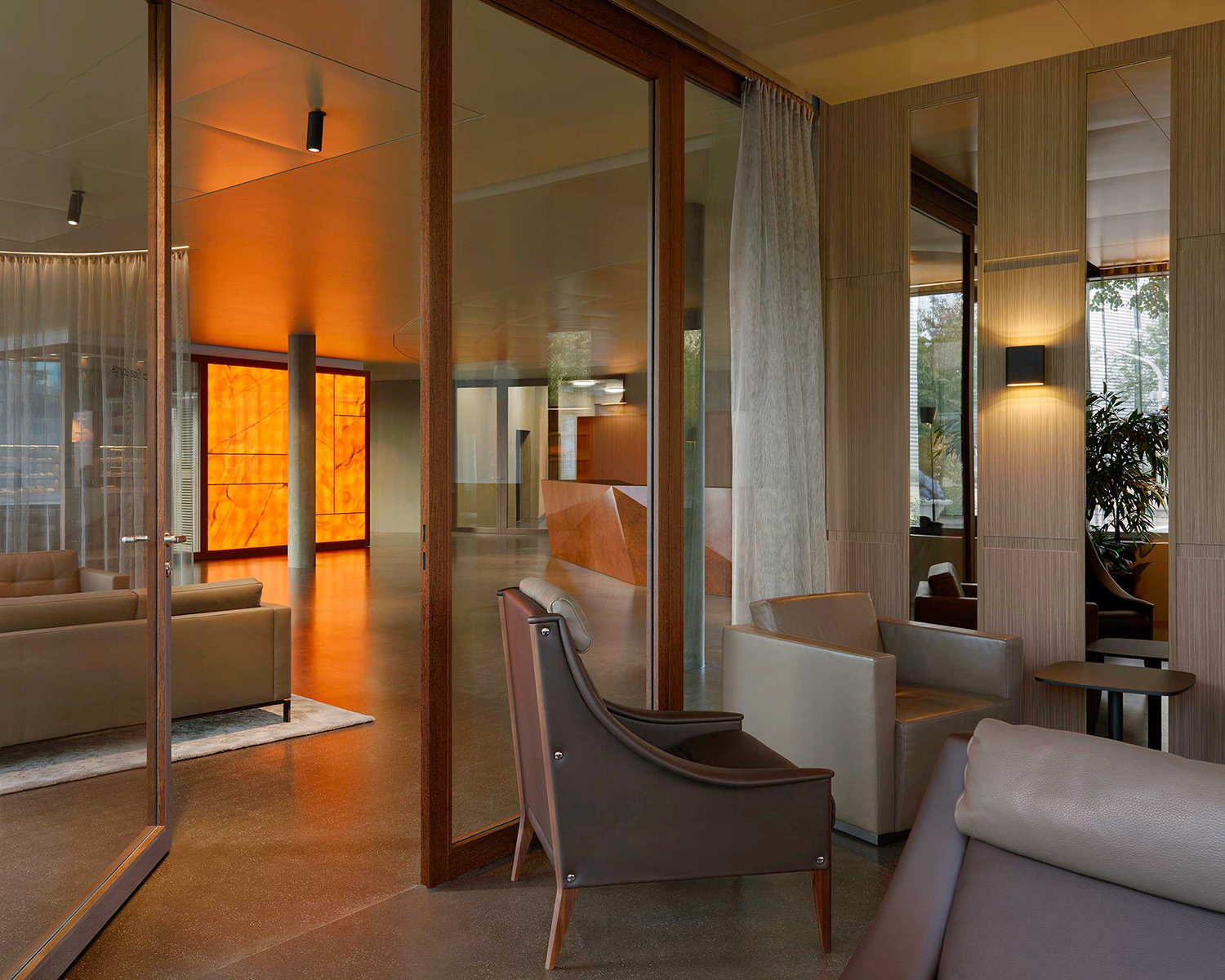 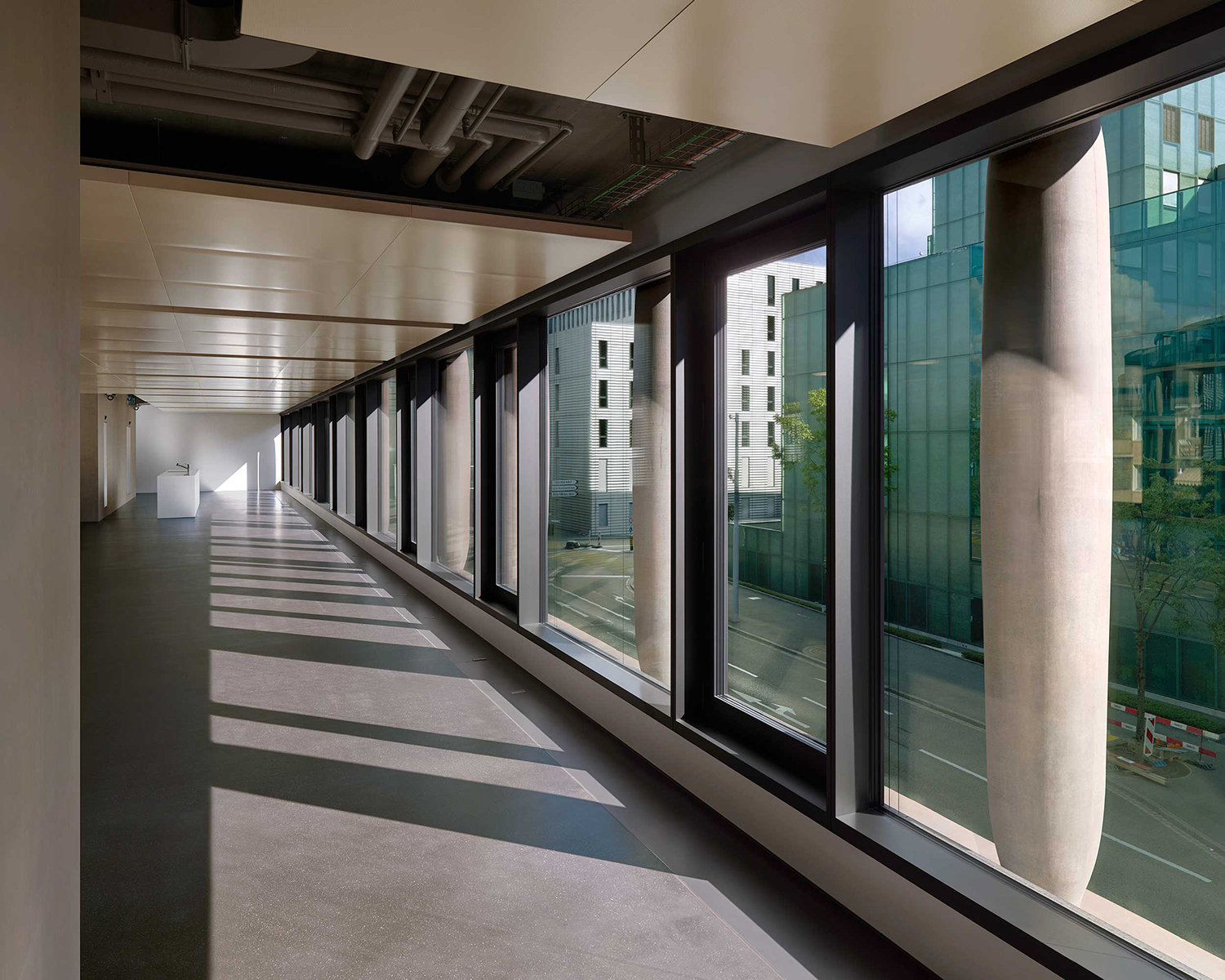 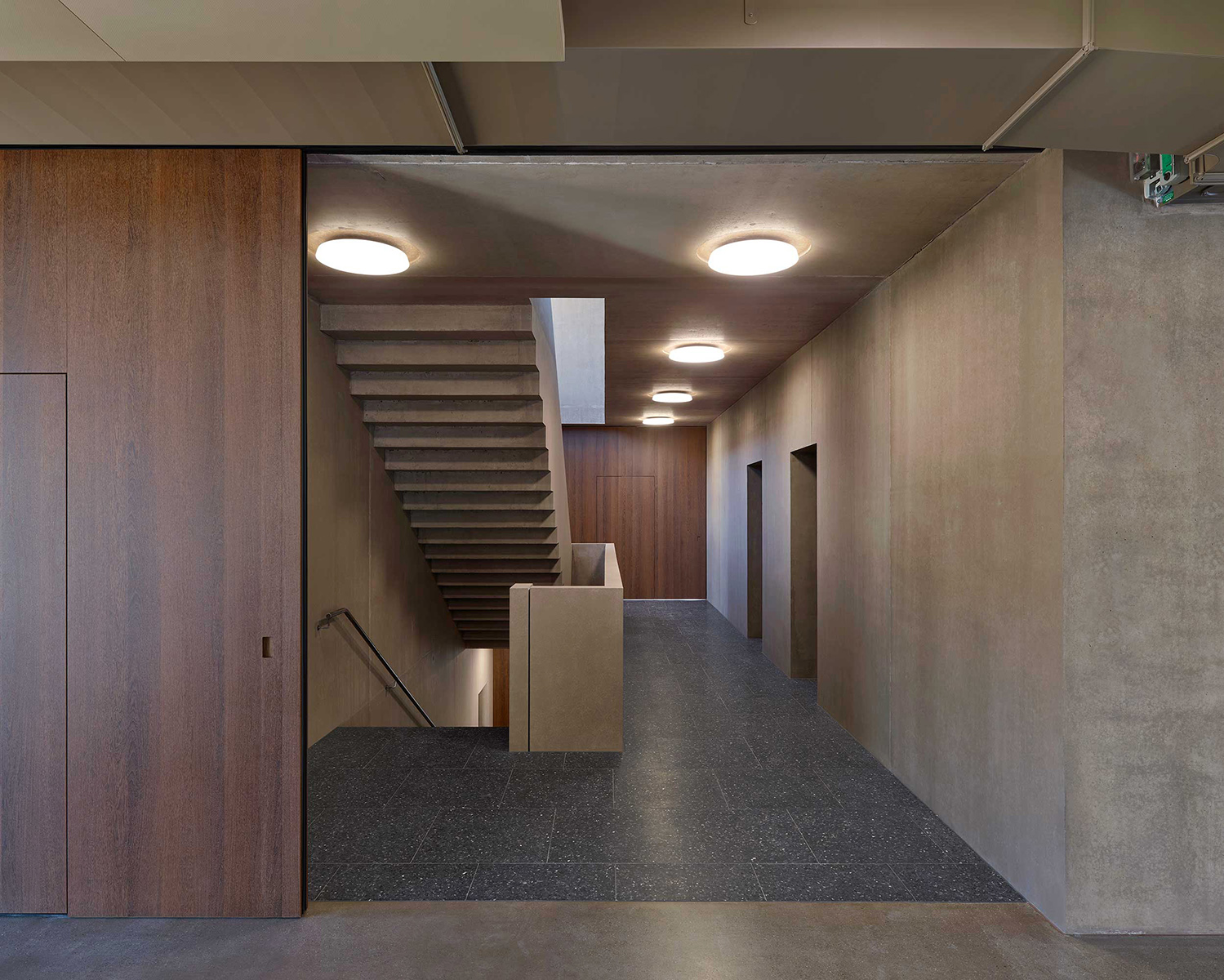 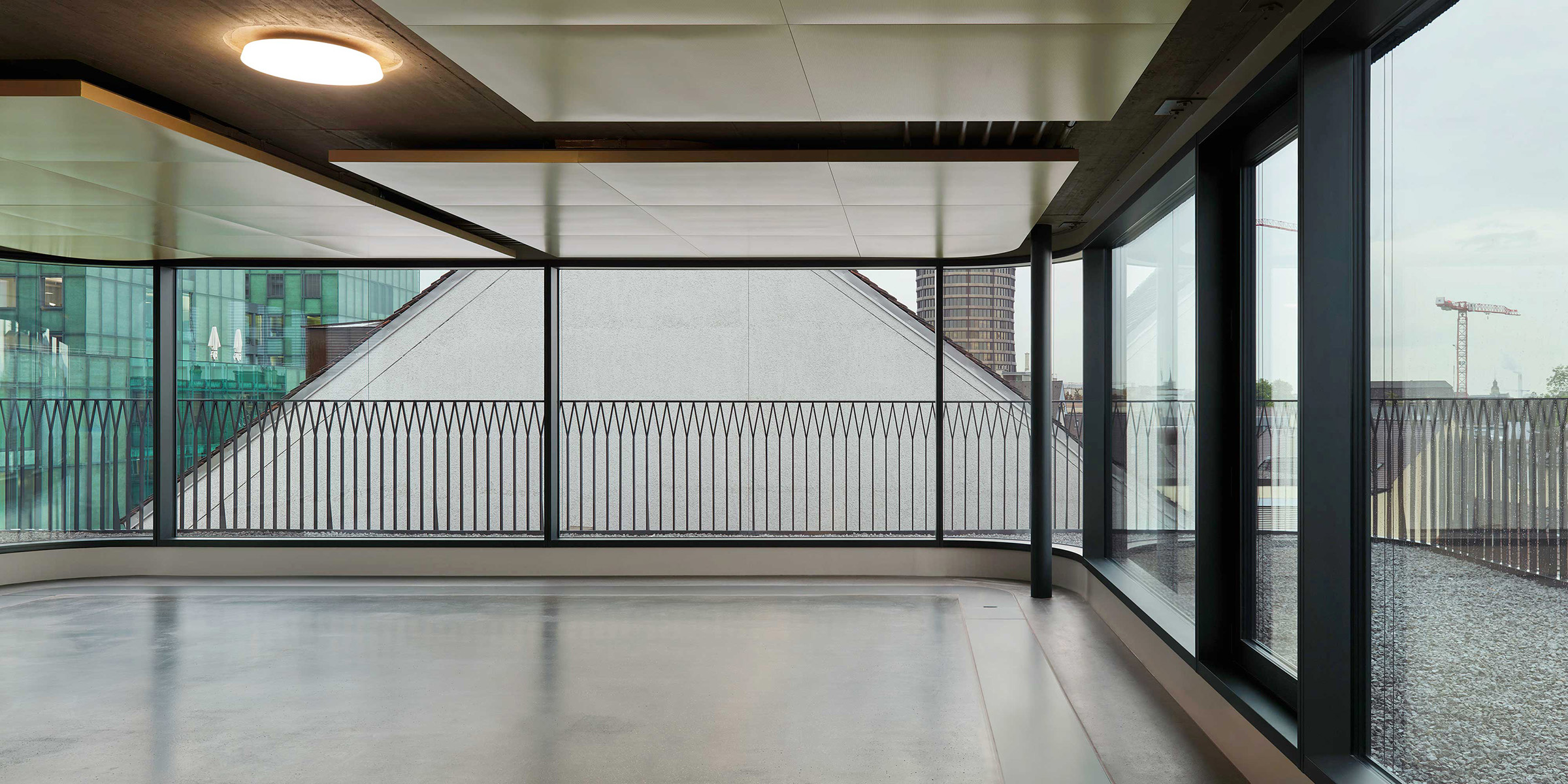 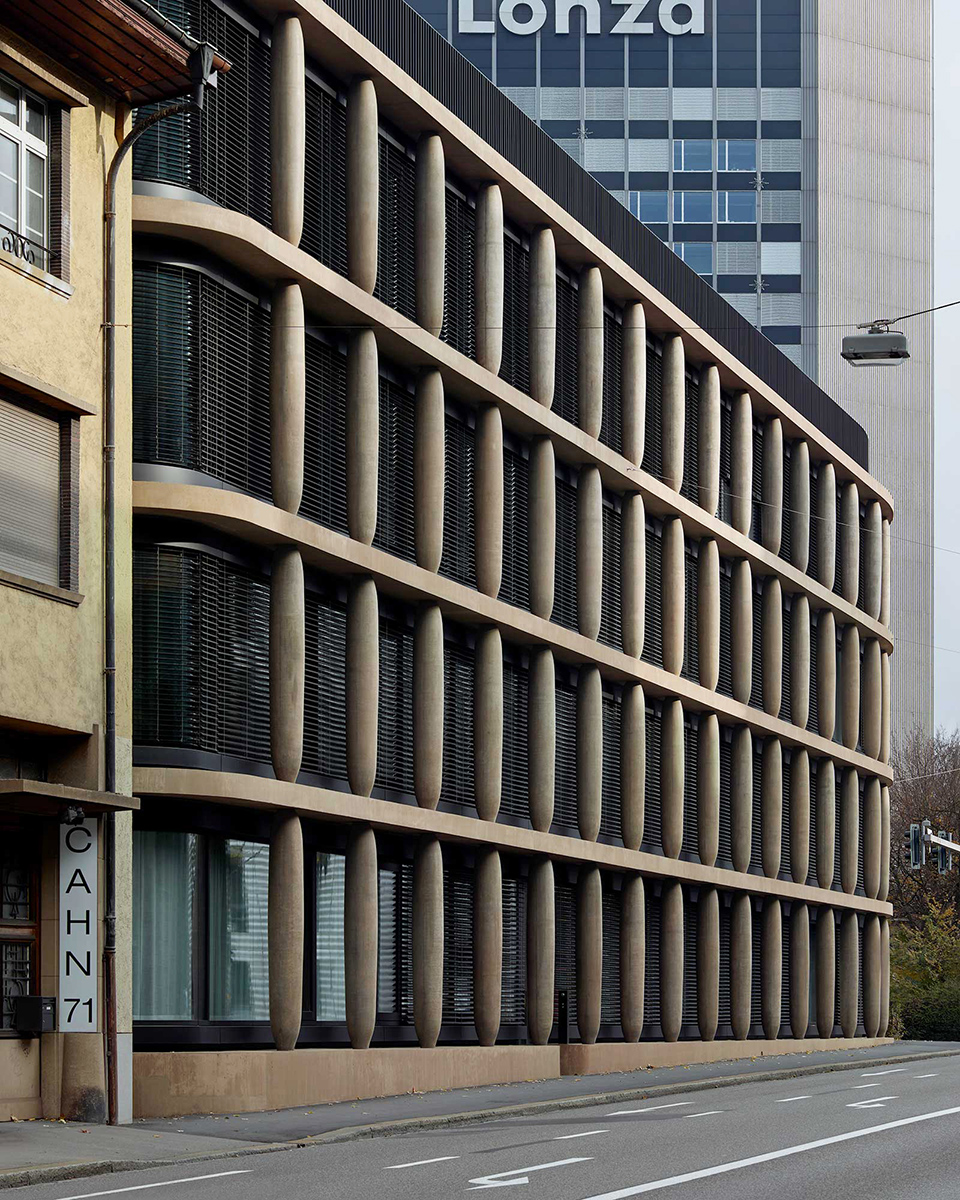 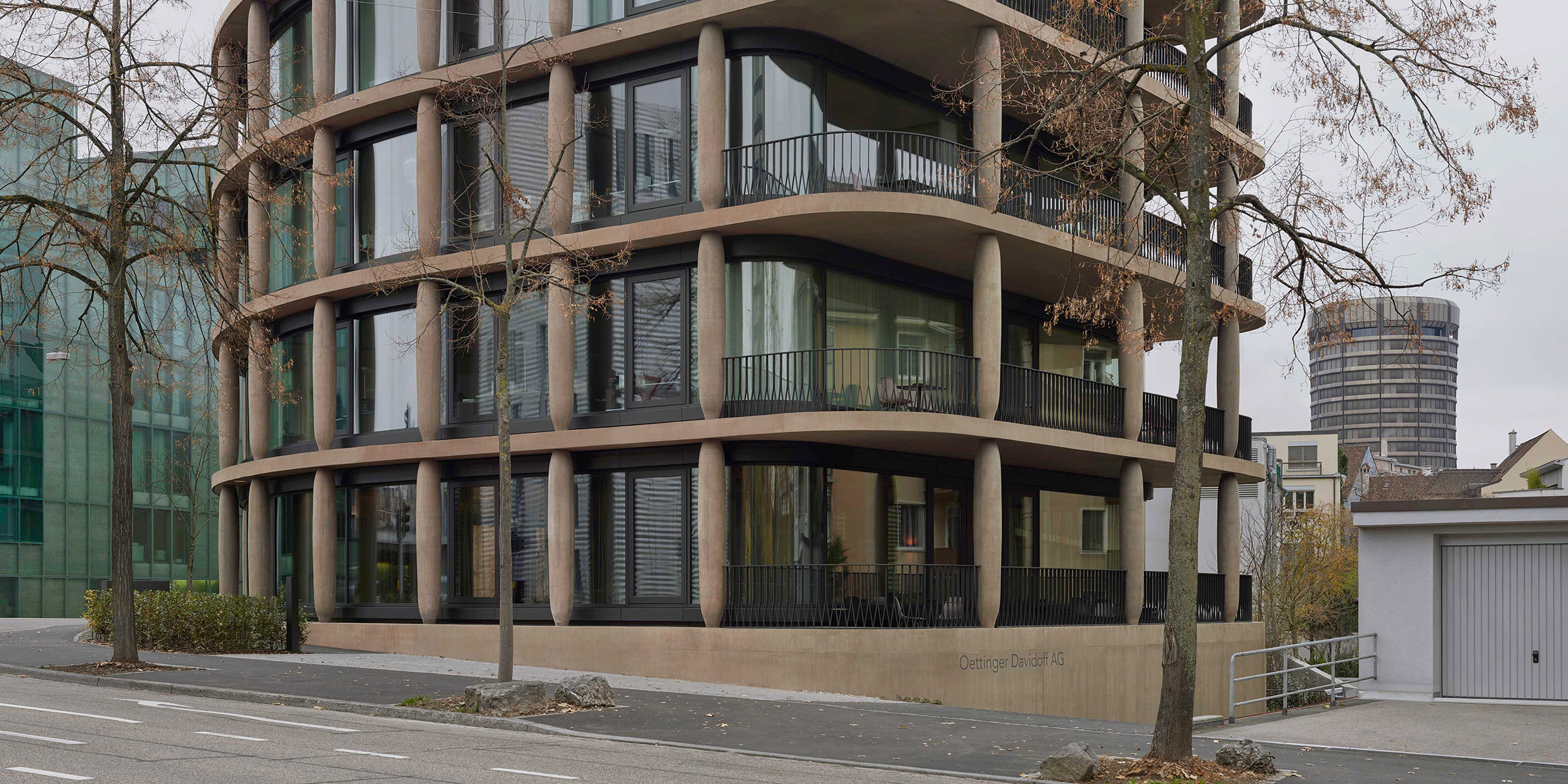 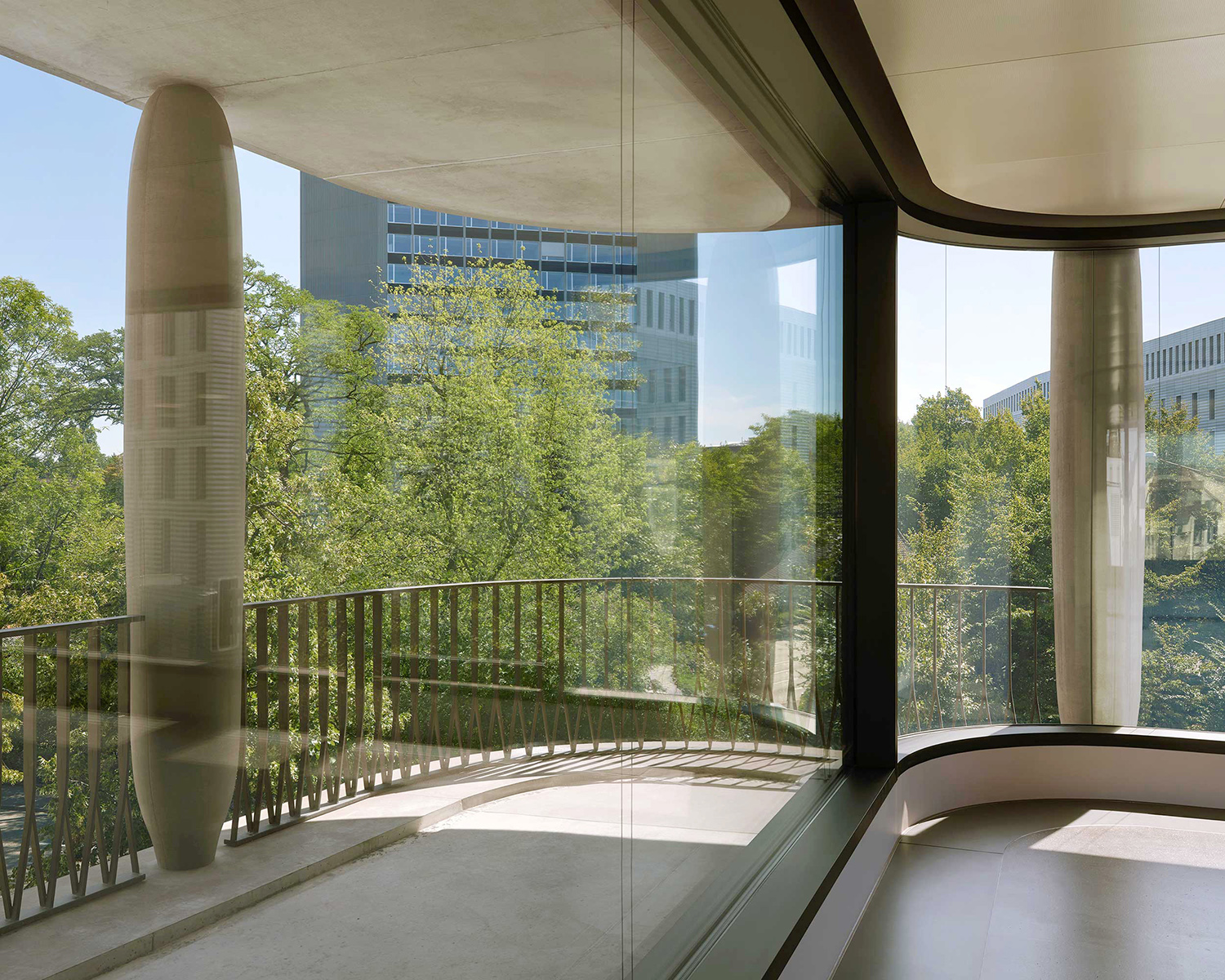 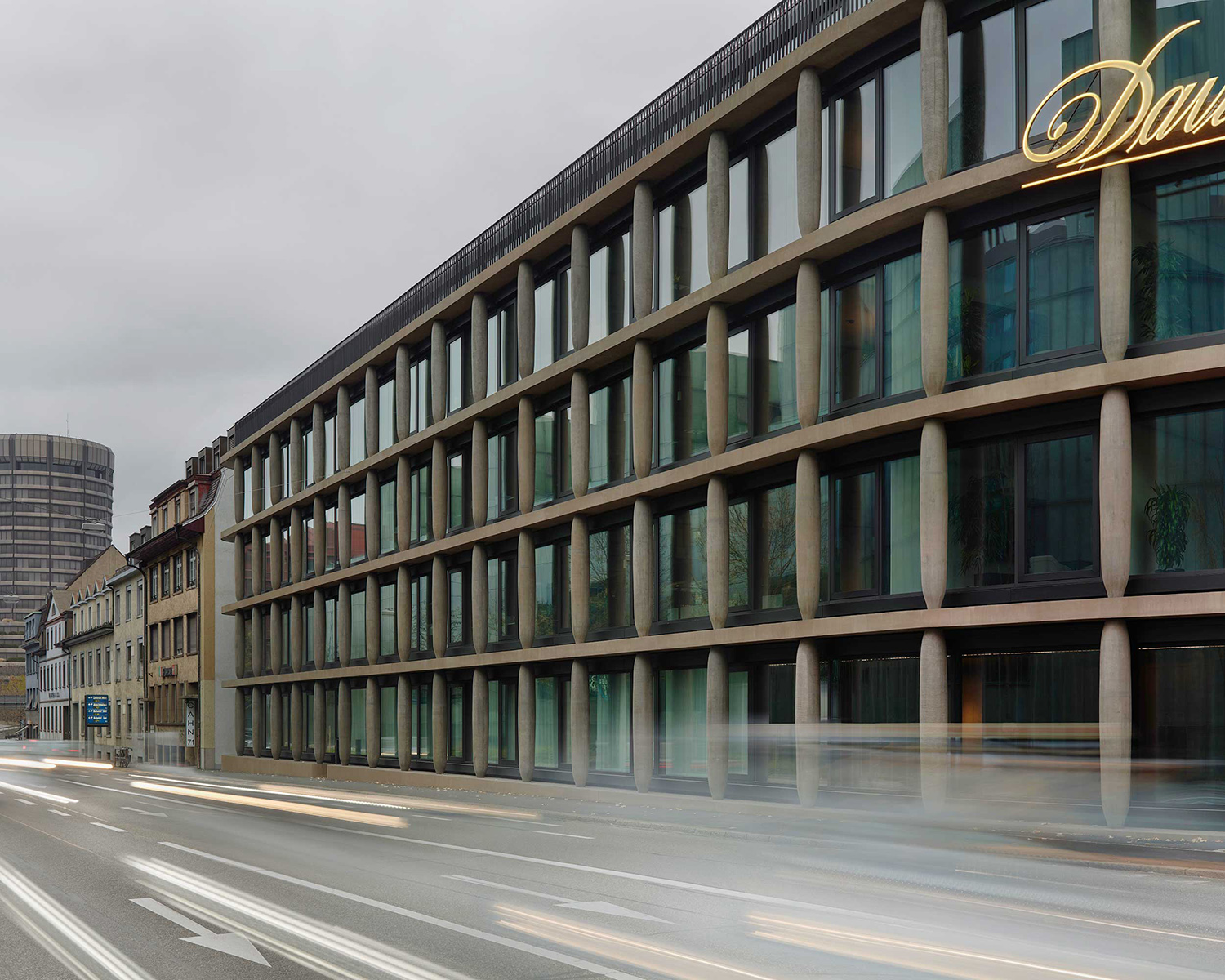