National Socialist Germany passed a law in 1937 aimed at regulating the redesign of German cities. The plan envisioned large administrative buildings, so-called Gauforums, to be erected as monumental symbols for the power held by the National Socialist Party. These building shared a basic floor plan: it included a Halle der Volksgemeinschaft [People’s Solidarity Hall] with an adjacent parade square and surrounding party and administrative buildings. By 1944, the Weimar Gauforum was the only one of the planned buildings to be largely completed.

During the German Democratic Republic (GDR), the building was converted into a multipurpose hall in 1971; after the fall of the Berlin Wall in 1989, in 2001, plans were prepared to convert it into a shopping mall and a theme park with a “Welcome Center.” This “Welcome Center” would provide information on the building’s history for tourists. The city commissioned two studies in 2002 to discuss the possibilities of giving the façade of the “Weimar Atrium” a design that remained sensitive to the historic preservation of the Gauforum.

Whenever a building is being preserved, the design process must find a new use that can be inscribed as new meaning onto the existing structure; however, it is equally possible that the only possible answer to this question is to refuse to provide the building with a new use.

Diener & Diener suggested in its report that all the facilities added during the German Democratic Republic be removed and the building’s imposing bare steel structure revealed. This bare structure should serve as a monument for, or more specifically against National Socialism. The shopping center would be built in front of the Gauhalle on the parade ground, which had itself been repurposed as a parking lot, with the sequence of names reflecting its varied history: “Karl-August-Platz,” “Adolf-Hitler-Platz,” “Karl-Marx-Platz,” and finally, without any historical association: “Weimar-Platz.”

Restoring the Halle der Volksgemeinschaft to its 1944 condition would enable the building’s subsequently obscured meaning to once again become evident: the building, which had never served its purpose, would simply stand there, useless, or rather: without use beyond recalling the delusion of the Third Reich. The building would simply provide an open-air experience as a monument for its architectural and historical significance. History, rather than being dismissed would be evoked and recalled by this impressive monument to the delusion and failure of National Socialism, or, we must add, would have been recalled: the design was never carried out. 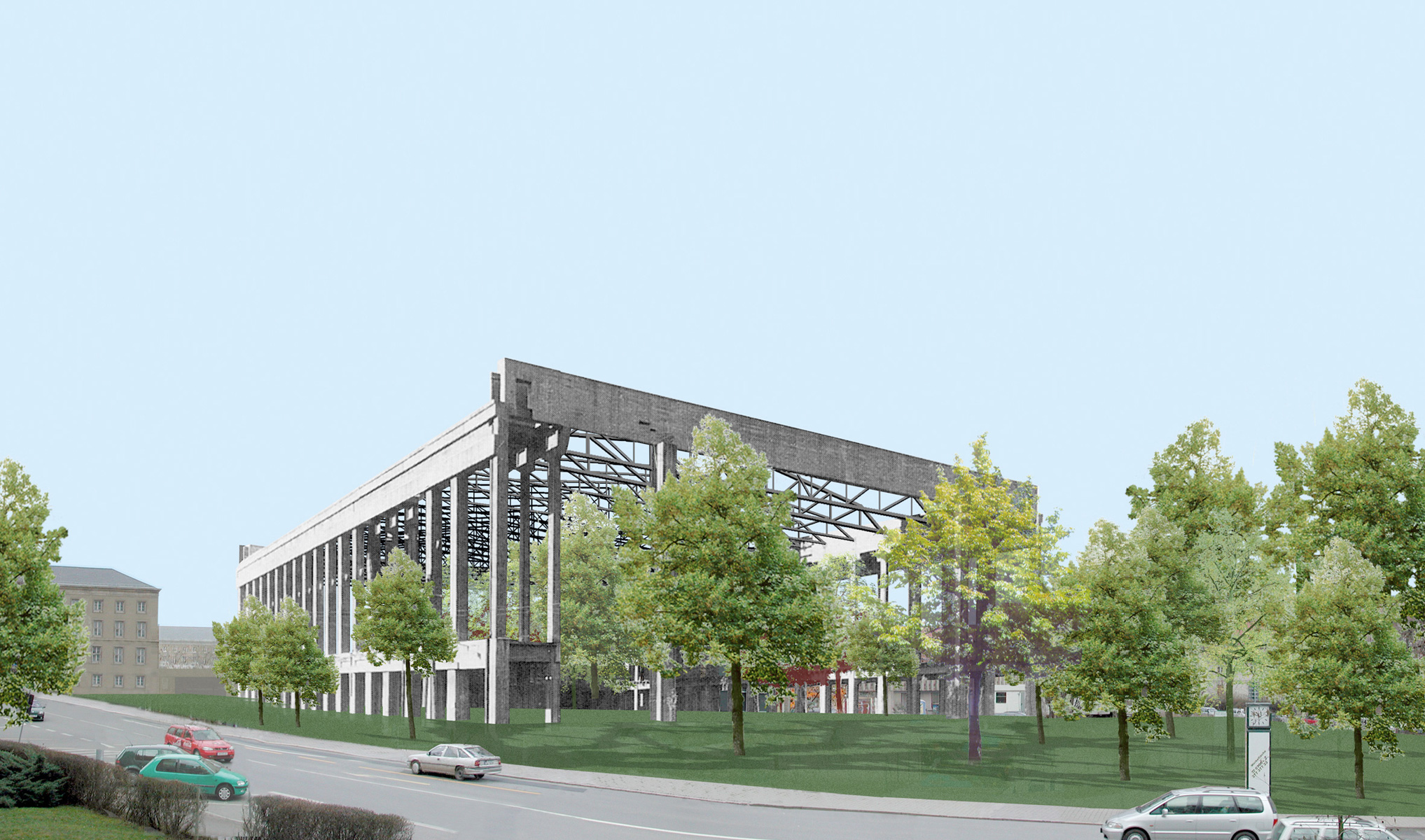