The Galerie Gmurzynska commissioned Diener&Diener in 1988 to build their new gallery space in Cologne. The architectural office had previously designed an exhibition space for the world-renowned gallery in Basel in 1980.

The site on the Goethestrasse is located in an exclusive residential area of Cologne-Marienburg. The neighborhood, located in the southern section of the city, bears the influenced of Camillo Sitte’s ideas for artistic town planning. Here, at the end of Historicism and the beginning of New Objectivity, the architects Joseph Maria Olbrich, Paul Pott, Paul Bonatz, Bruno Paul, Otto March, Hanns Koerfer, and slightly later Dominikus Böhm built houses intended for the affluent inhabitants of Cologne. Other tenants have moved in today, mostly consulate employees and office workers.
The gallery building consists of two adjoining cubes. One cube is larger and taller, making it seem as if the second cube, which does not reach into the garden as far, is leaning against it. The wood-clad building stands on a red brick base. The luminous red color of the smoothly planed cedarwood façade find a muted echo in the color tone of the burnt bricks. A large field that approximates a square and stands distinct from the surrounding vertical wood boarding, appears over the doorway. With its slab-sized boards and protruding framework, it nearly resembles a floating monochrome image. This square returns, as if a leitmotif, on the garden facing side of the building and hidden from the street. Together, they frame the exhibition space inside that extends between them. Light enters the space laterally from the window frieze along the lip of the roof.

The overhanging ledge of the roof shapes the outside appearance of the cubic building. The side wall, more so than its front or rear façade, gives the building the appearance of a house. The windows, aligned with the respective cabinets, further underscore this appearance. The windowless façade to the street gives a sense of the building’s simple organization. The ground floor basically repeats the structure of the upstairs floor. A common straight stairs connects the exhibition space and the flanking cabinets.

Visitors access the gallery’s entry-hall up a few steps from the front garden and where the small and the large cube intersect. From here their gaze is drawn to the directly adjoining exhibition space and through a floor-length window into the garden beyond. When seen from close by, the sculptures become apparent on terrace, which itself has supporting wall frame. The terrace extends out into the lawn and serves as an extension of the exhibition space, inserting itself between house and garden. As such, it pushes the visitor’s immediate view of the garden back. The building’s exterior volume and the surrounding sculptures closely relate to and interact with the garden elements, the cherry trees, the enclosure, to create new spaces up close or from afar.
In contrast to the villas that Mies van der Rohe built in Krefeld and that are today used as exhibition spaces, these rooms in Cologne do not open onto the neighborhood. They only refer back to themselves.

Space and light create the actual context for the exhibition objects. This becomes especially apparent as the light from the south facing windows high on the wall changes over the course of the day, while the light in opposite cabinets remains constant. These are elementary, archetypal spaces. Their general form allows any new article to enrich them to an even greater extent. 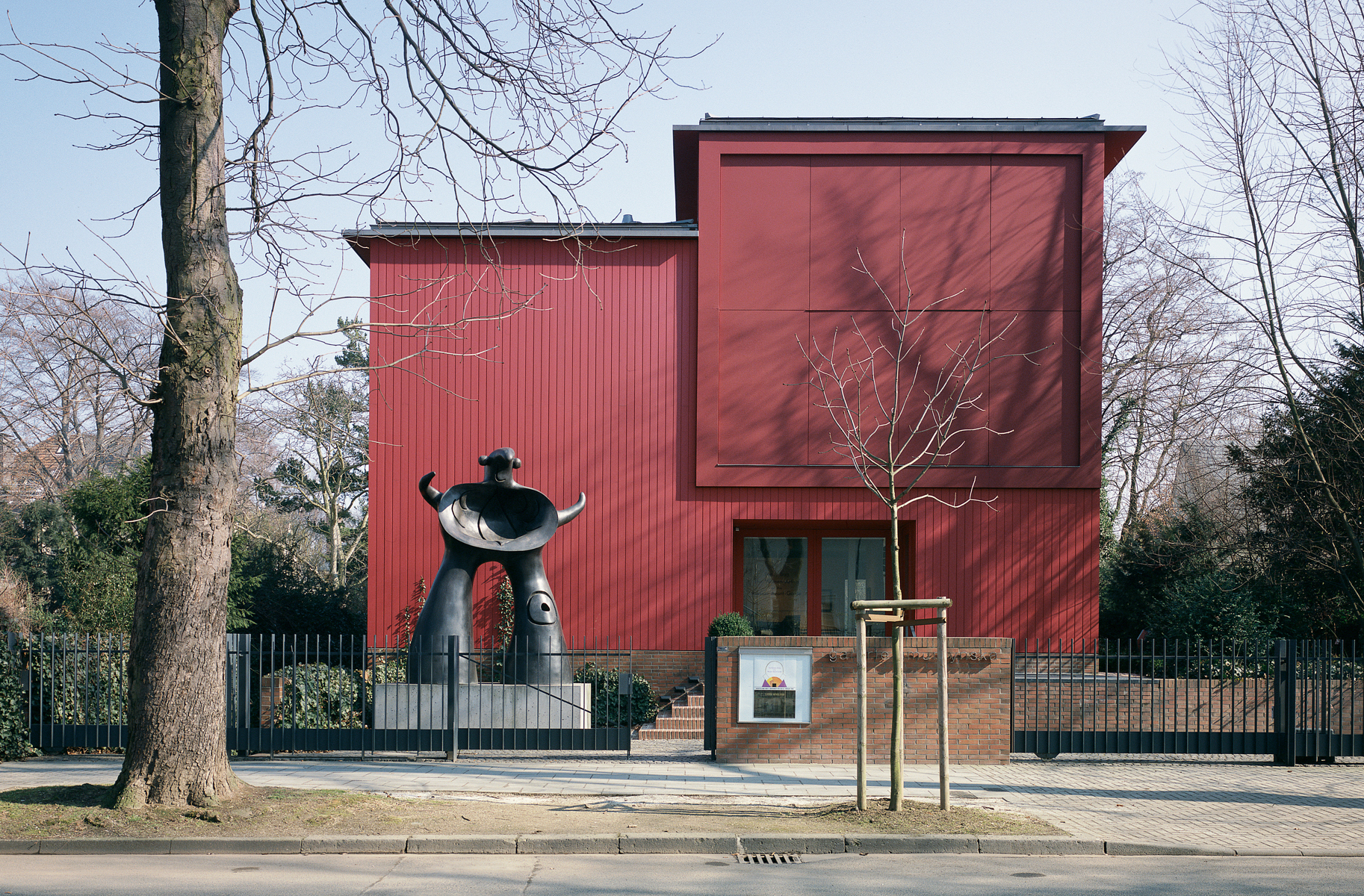 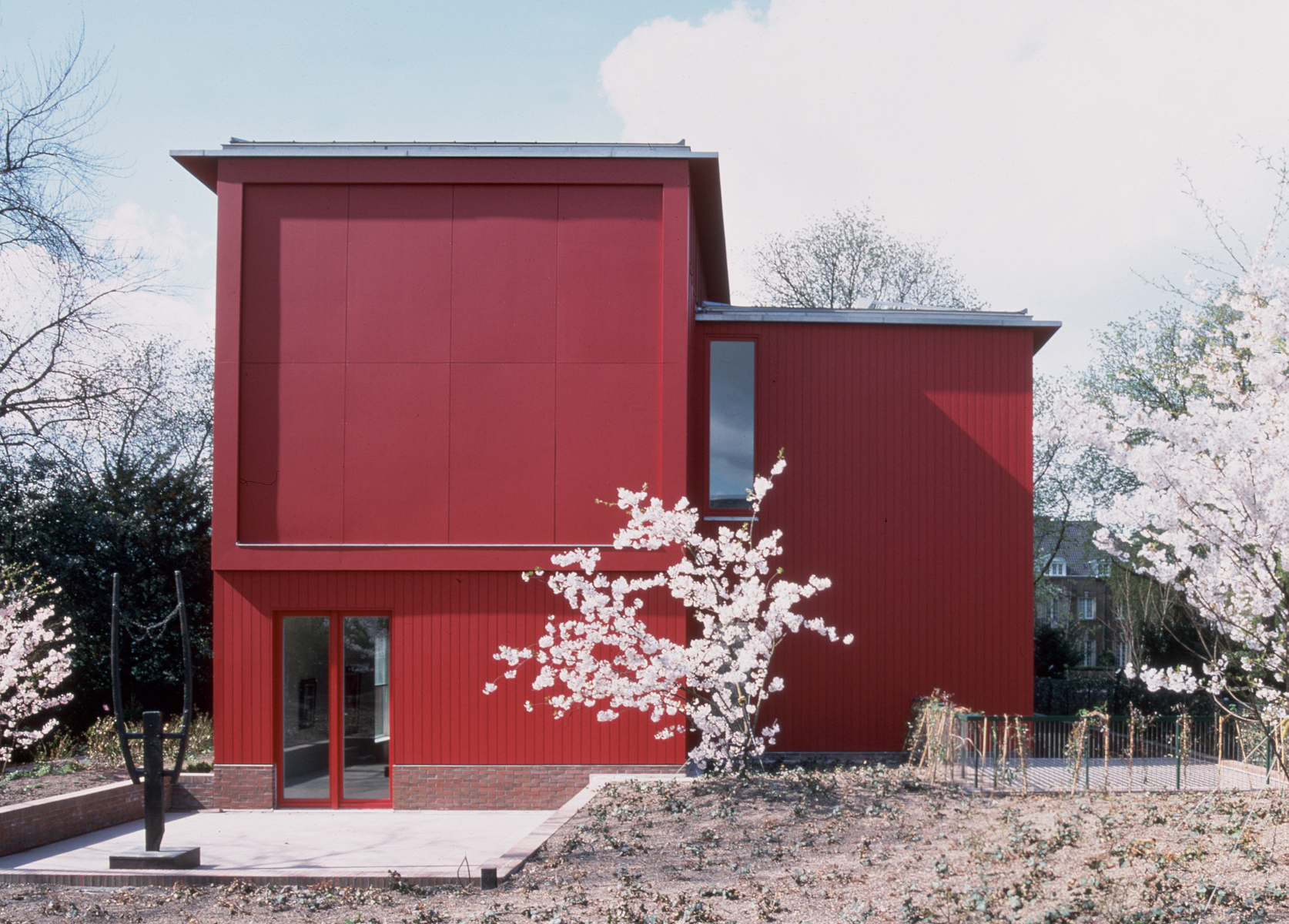 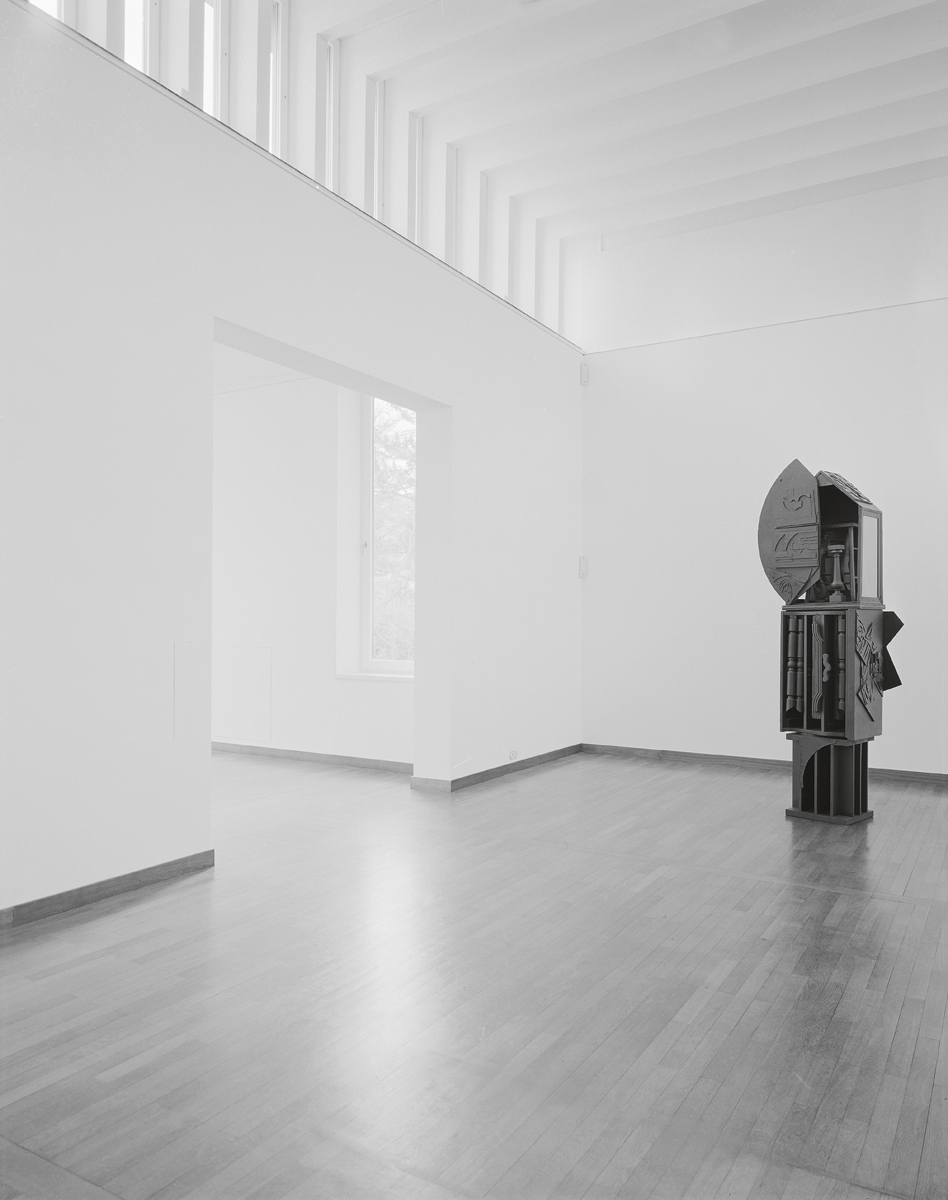 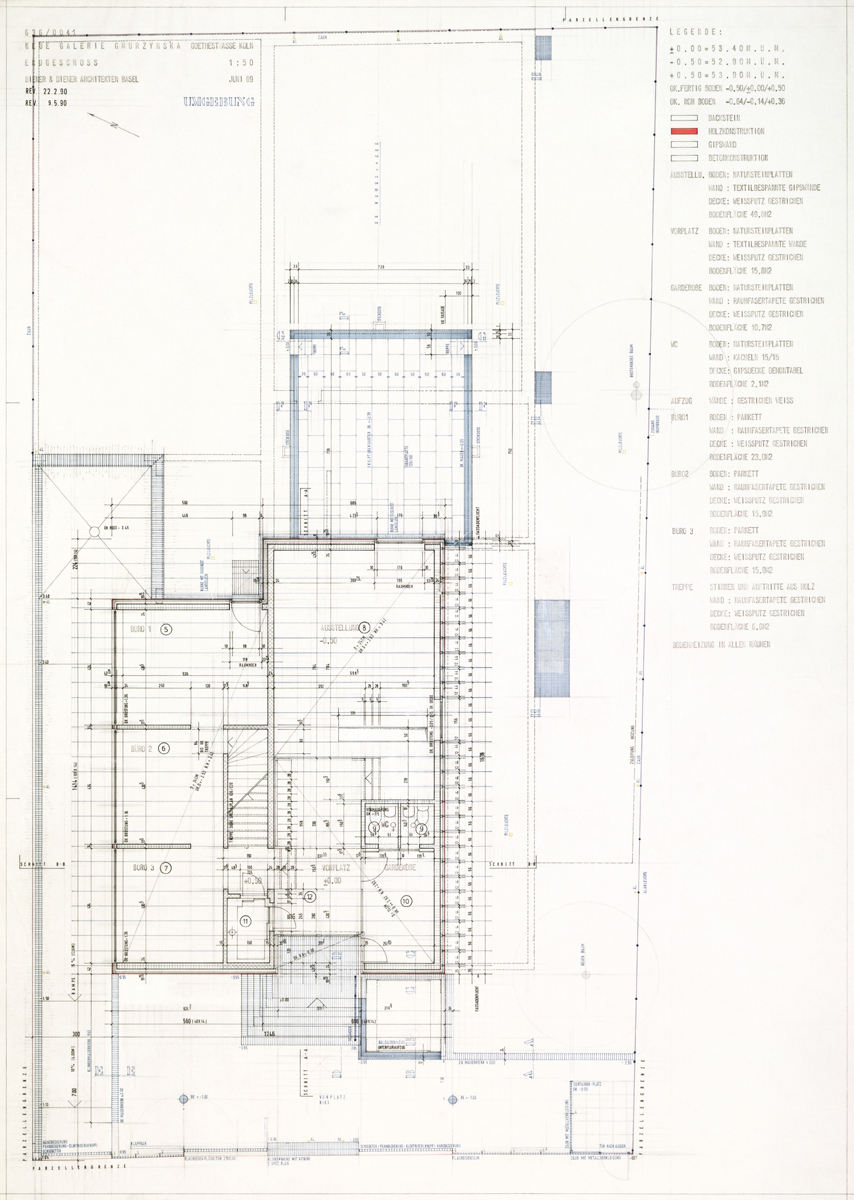 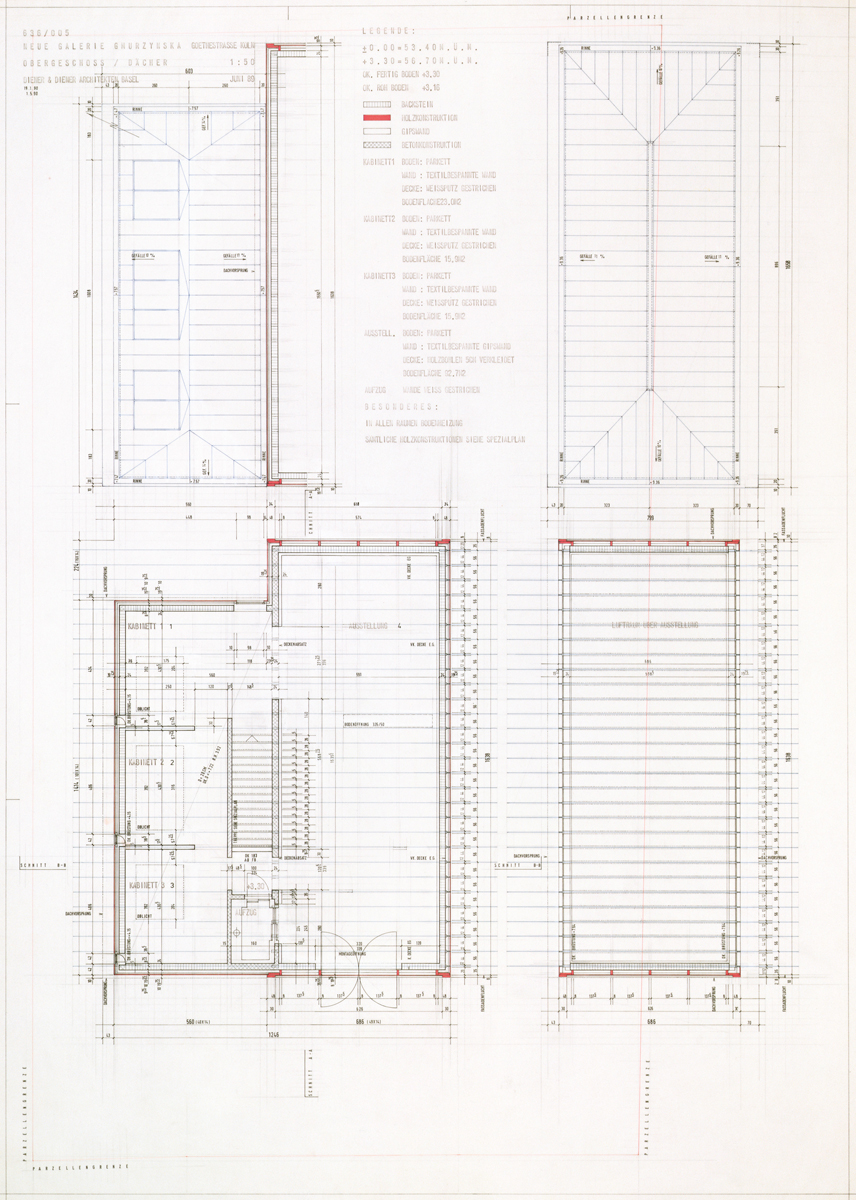 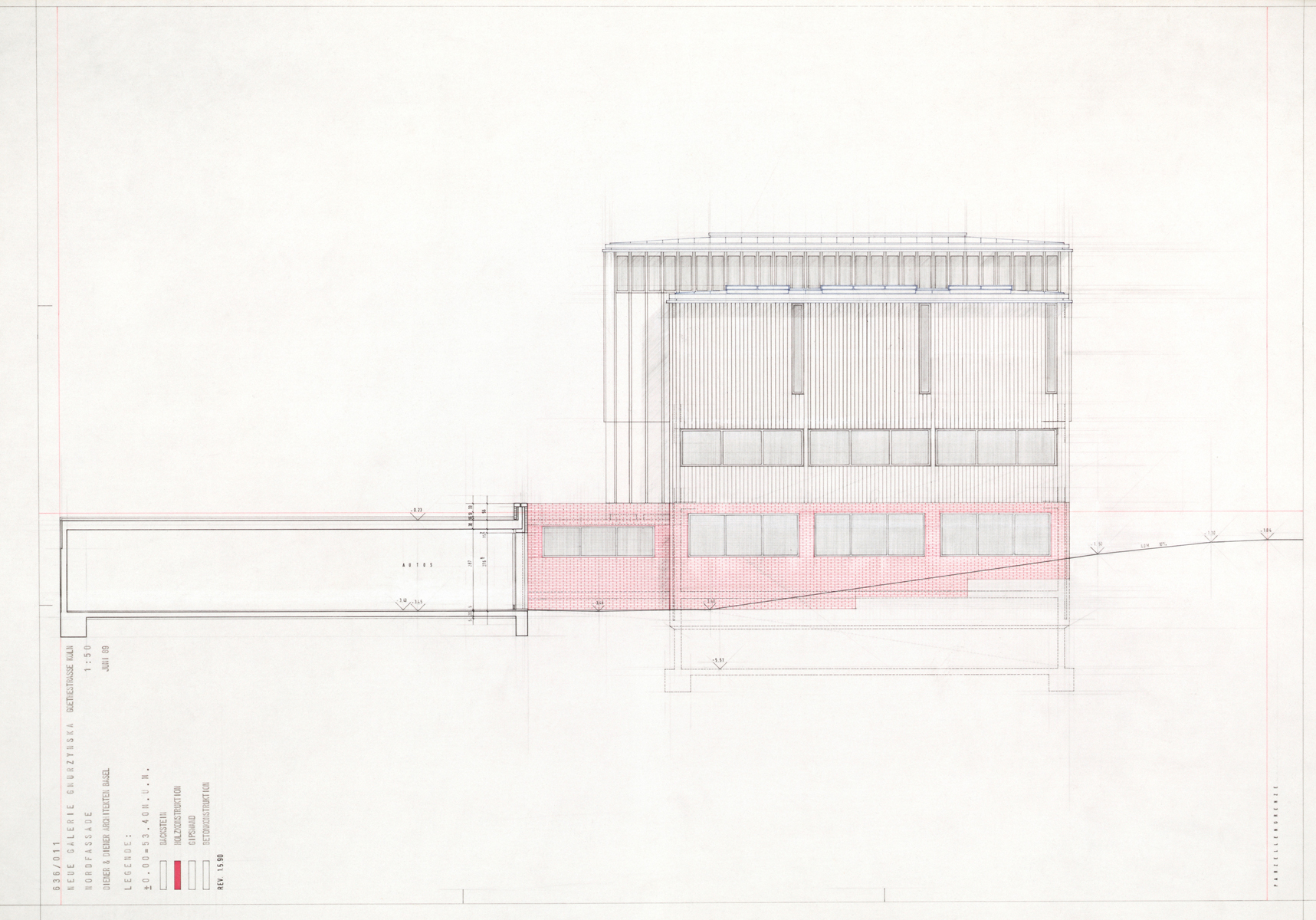 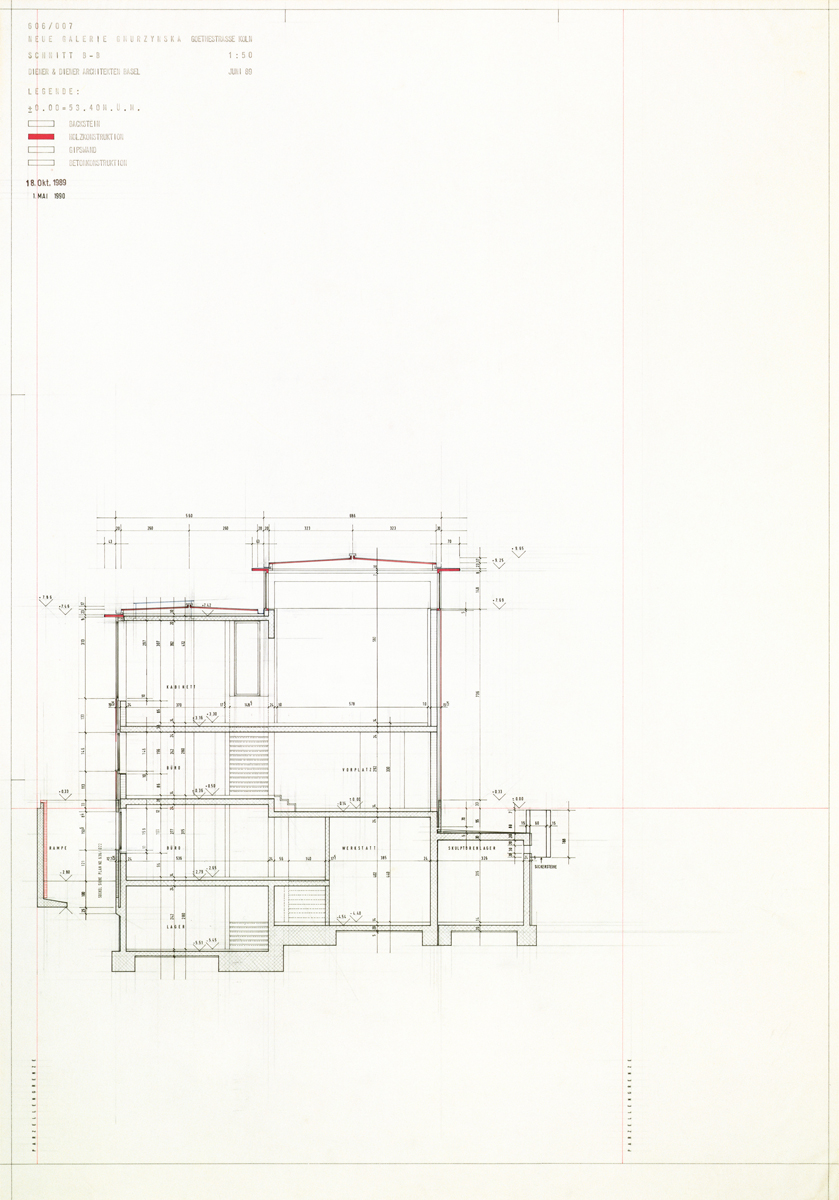