The building on the outskirts of the Tiergarten in Berlin Mitte was built as a grand bourgeois palace in the neoclassical style by Friedrich Hitzig in 1870/71 and has served as the seat of the Swiss Embassy since 1919. This building was originally one of many similar buildings lining the street. Today, it stands as a solitary building on the banks of the Spree, located on a river bend between Berlin’s Central Railway Stations, the German Bundestag, and the Office of the Federal Chancellor.
Under National-Socialist rule, nearly all the buildings in the area fell victim to the projected “Large Hall” that was to be part of the “World Capital Germania;” allied bombing raids destroyed the remaining buildings. After 1945, the Swiss Embassy was the only building left standing in Berlin Alsen. When the Berlin Wall was built in 1961, the building was relegated to the outer periphery of West Berlin. With German reunification in 1989, this urban situation again changed fundamentally and the building inhabited a strategic central location in Germany’s capital city: the embassy building had gained new relevance.

A key intention behind the east wing extension was to complement and frame the existing palatial building as an urban fragment. To this end, the new building stands next to the original palace as a second and separate building. A free symmetry determines the composition of its façade as seen in Gunnar Asplund’s extension of Göteburg Town Hall. Within the context of this entire development, the façade loses some of its heaviness and gains a sense of vitality. The new building does not appear to stand as an autonomous volume but as a wing developed in close correlation and formal interaction with the existing building. Old and new come together to form an architectural whole. The present day and the historic past remain equally present.
The annex houses the diplomatic and consular services. A courtyard arranges the north and east facing rooms. Facing the schematic order of the neoclassical palace façade is an elementary figure consisting of wall and voids. The interaction of empty and infilled wall cavities produces a manifold dialogue between inside and outside, massiveness and emptiness.

The material quality of the annex’s exterior also stands in contrast to the existing palatial building. The cement mixture used contains coquina stone and follows a special processing method, which produces subtle tonalities running from ochre to gray. This produces a correspondence between the historic and the new building without the temporal distinction in their architectural language being denied.
Helmut Federle’s framing artwork completes the development’s west façade, giving the firewall its unique features. The raw cement orthogonal relief covers the entire front, its sculptural quality congenially combining with the architecture. This relief forms both an integral part of the building and represents what remains absent. The wall no longer stands in for the destroyed house that used to stand here. Instead, the massive cement bands contain inscribed within them the memory of temporal durations. These are given lasting expression in the shape of the relief. 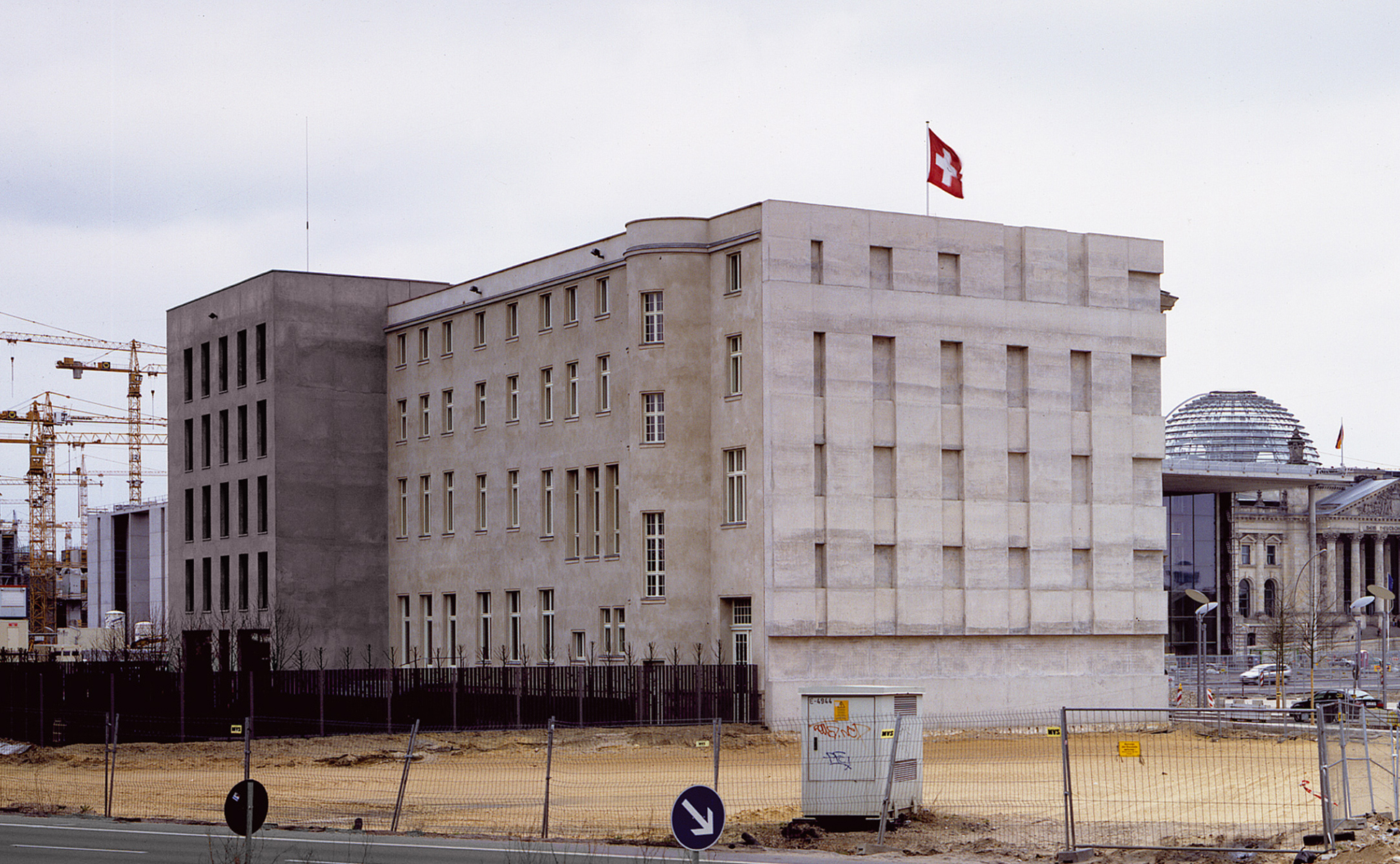 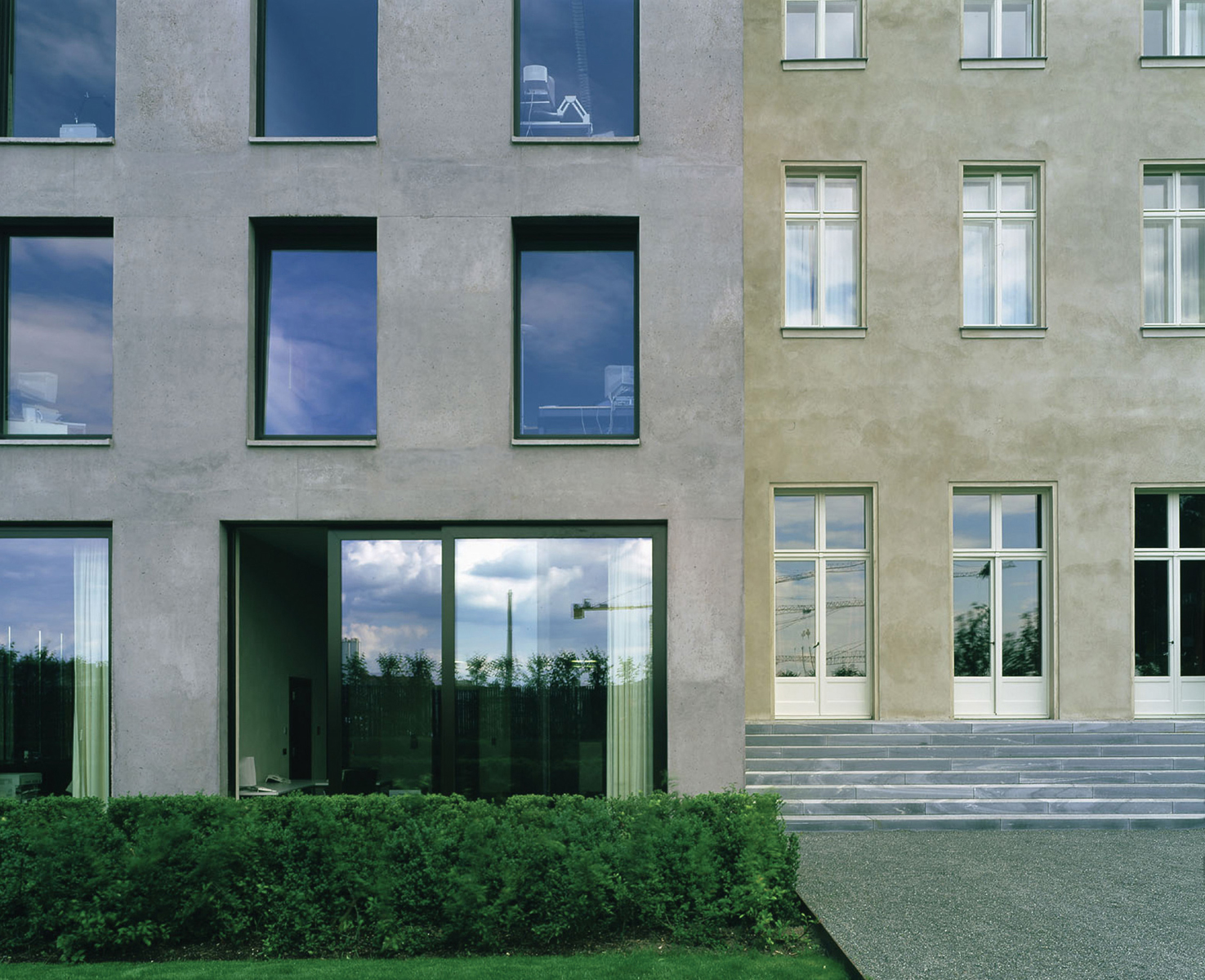 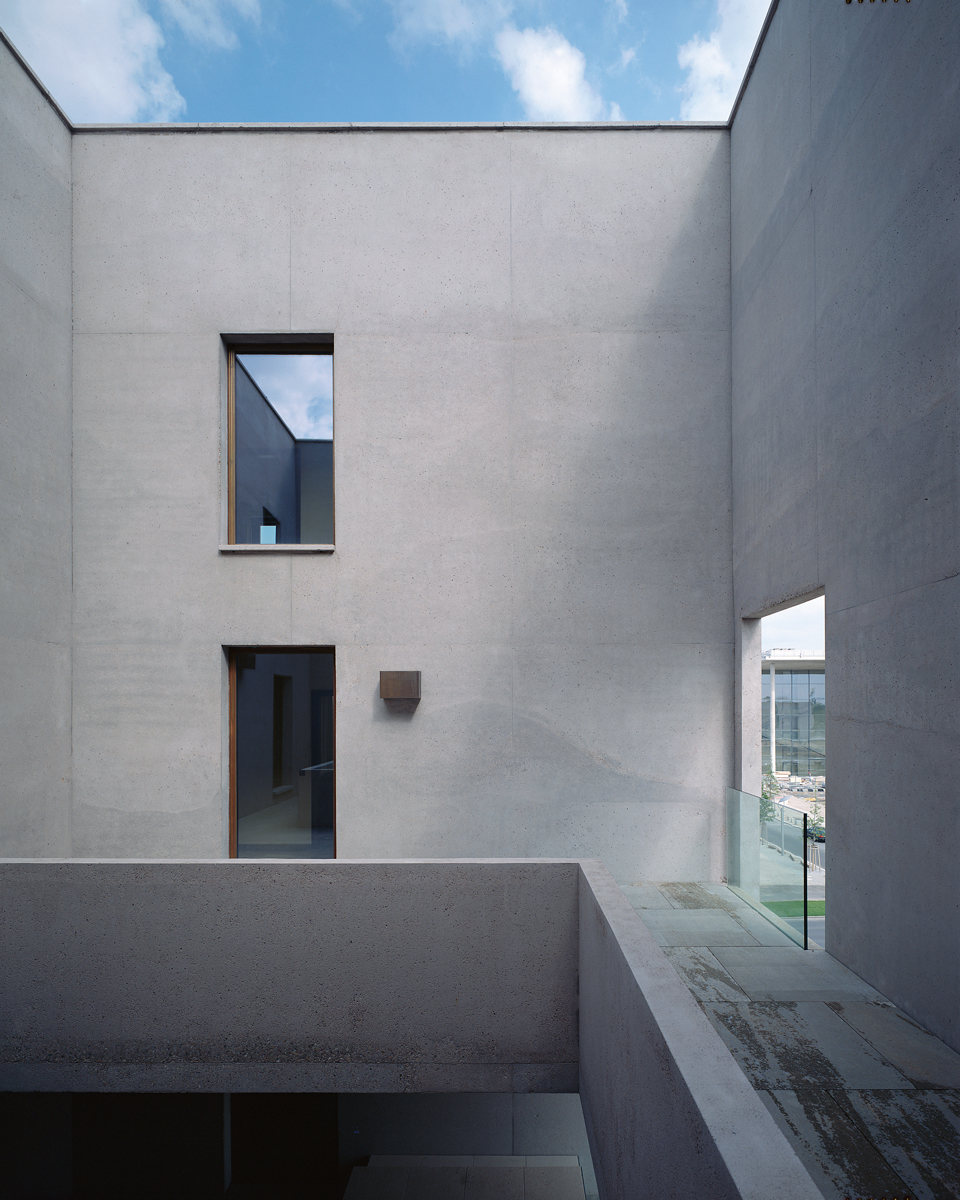 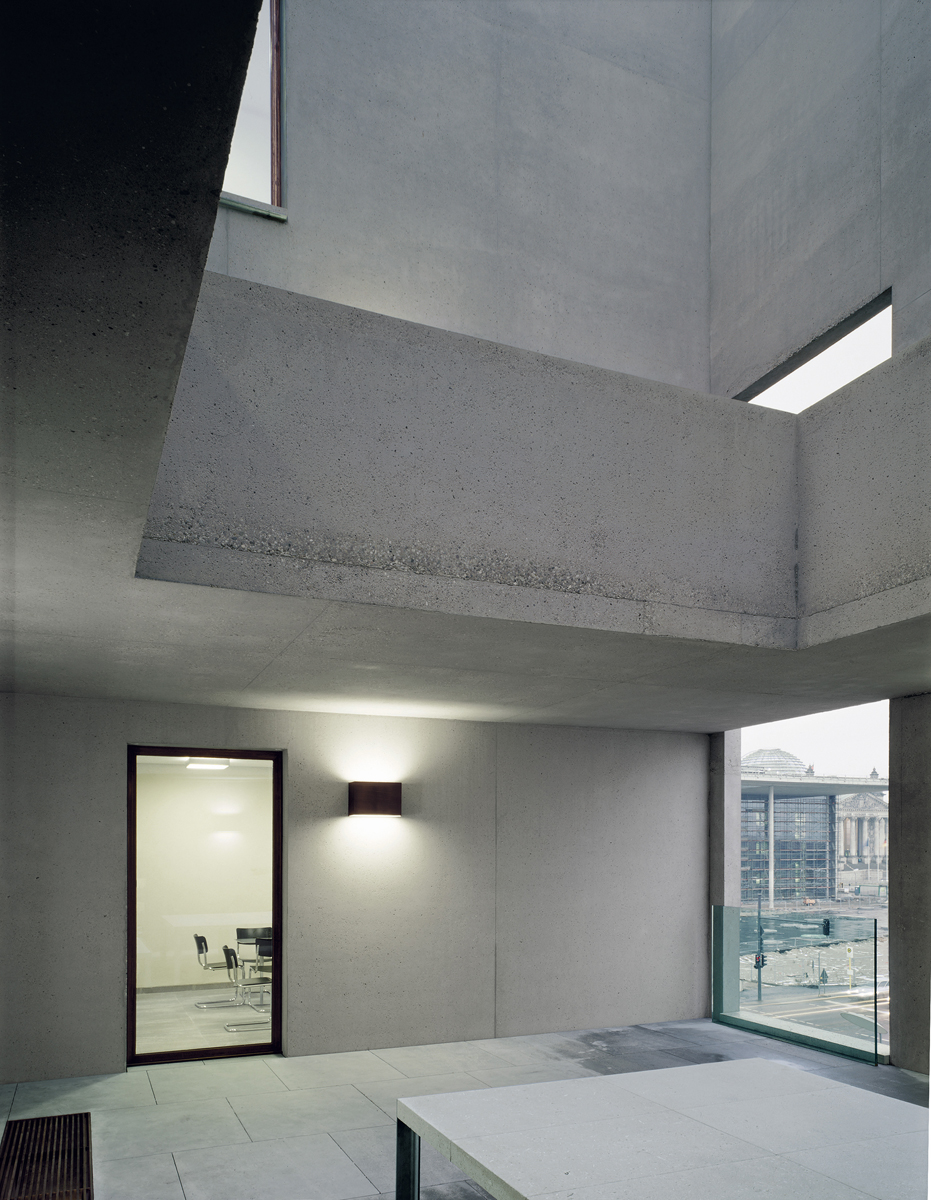 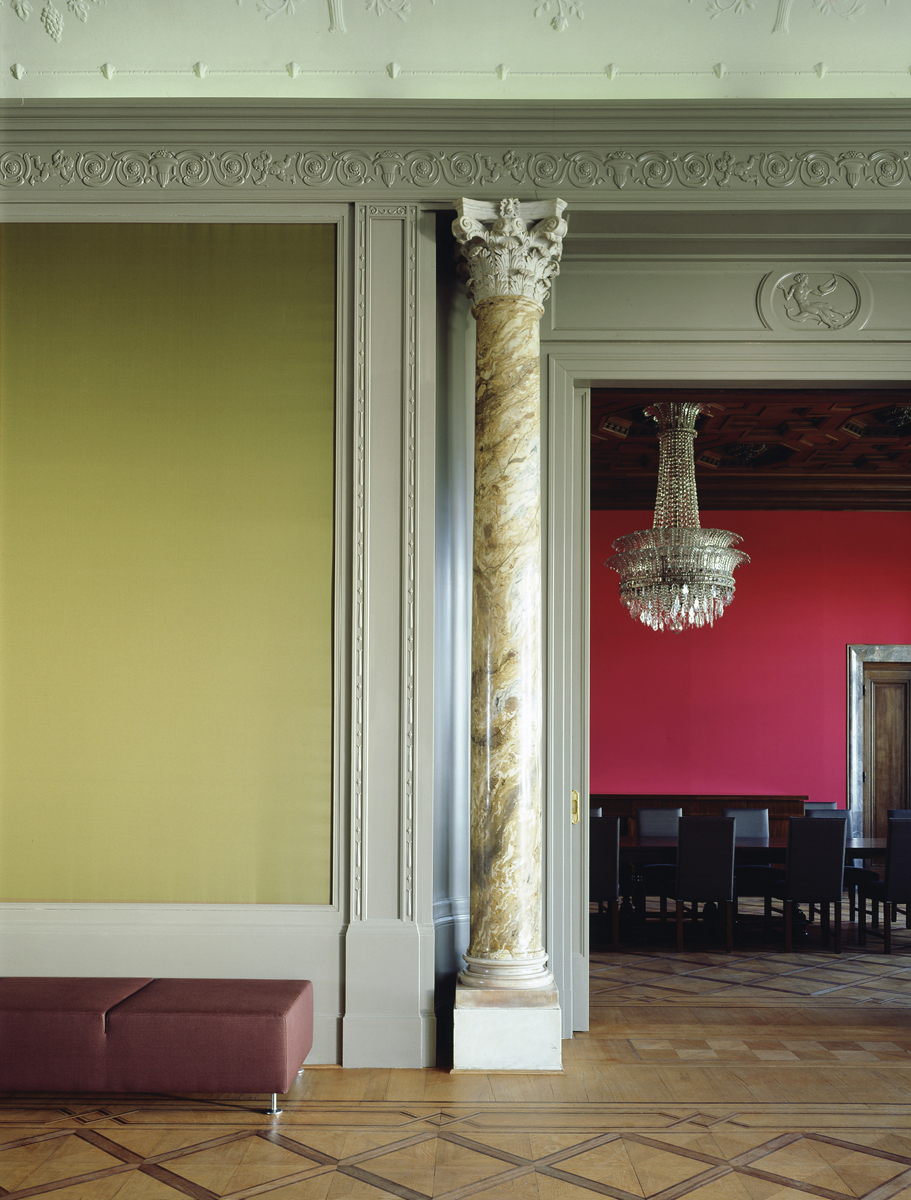 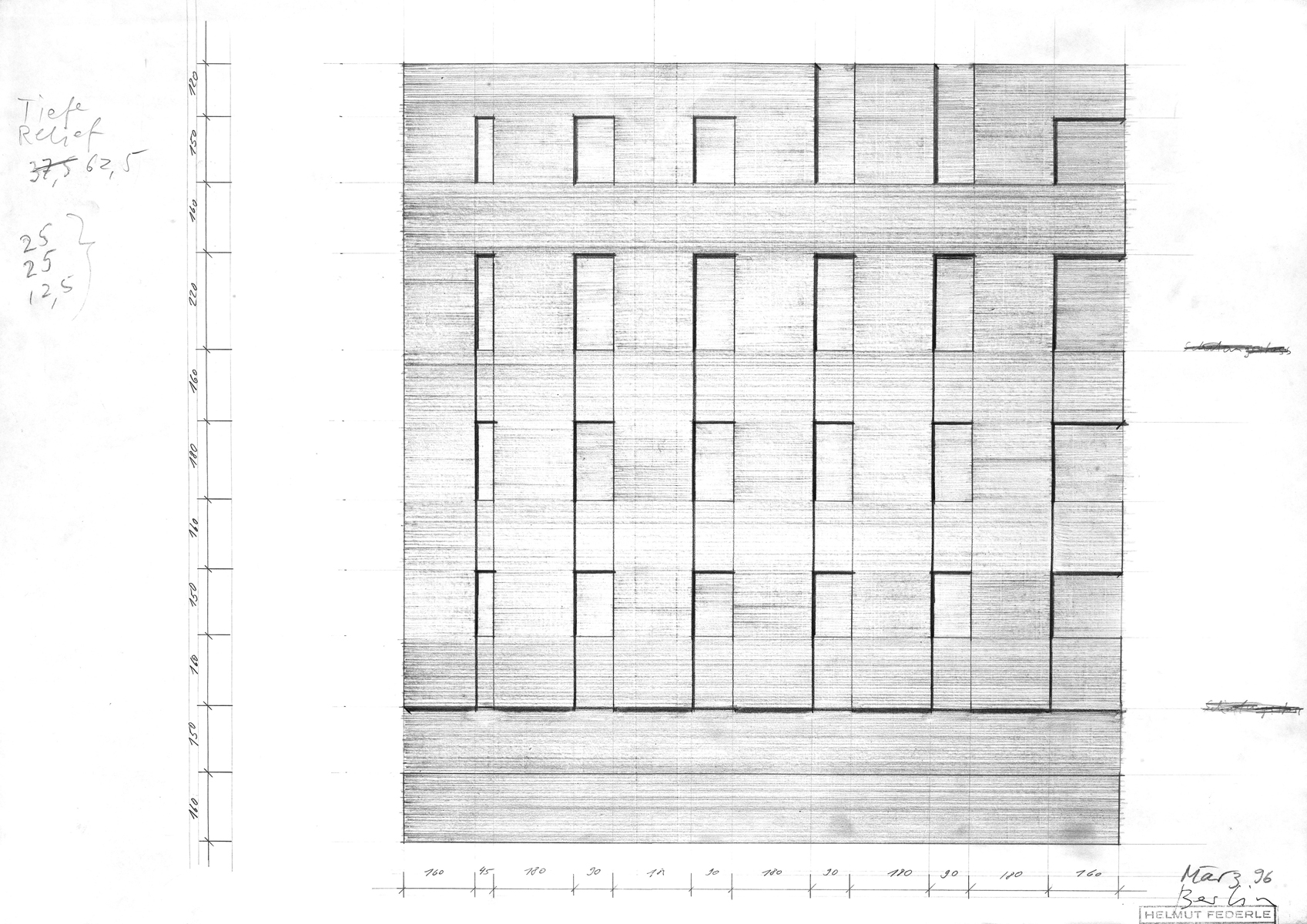 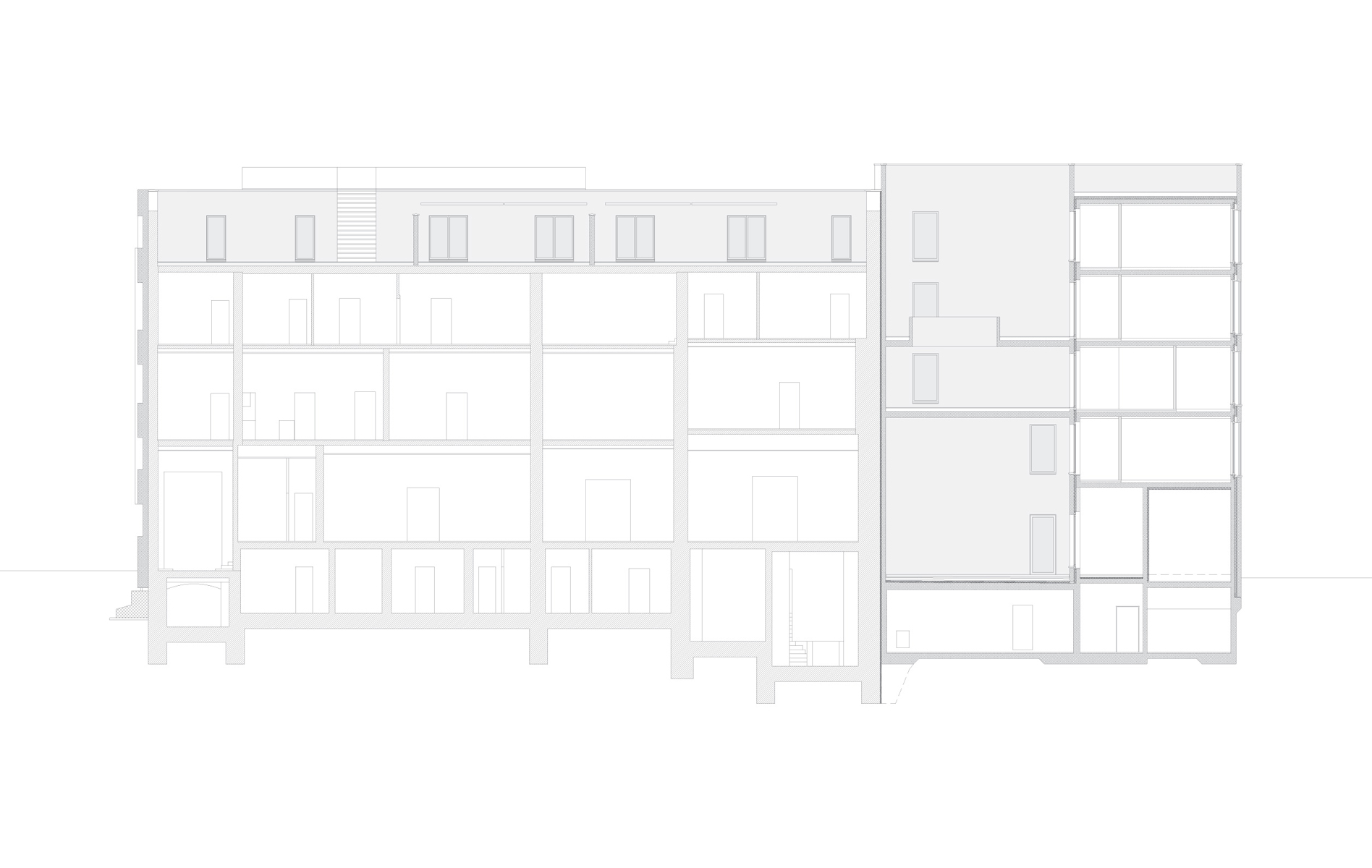 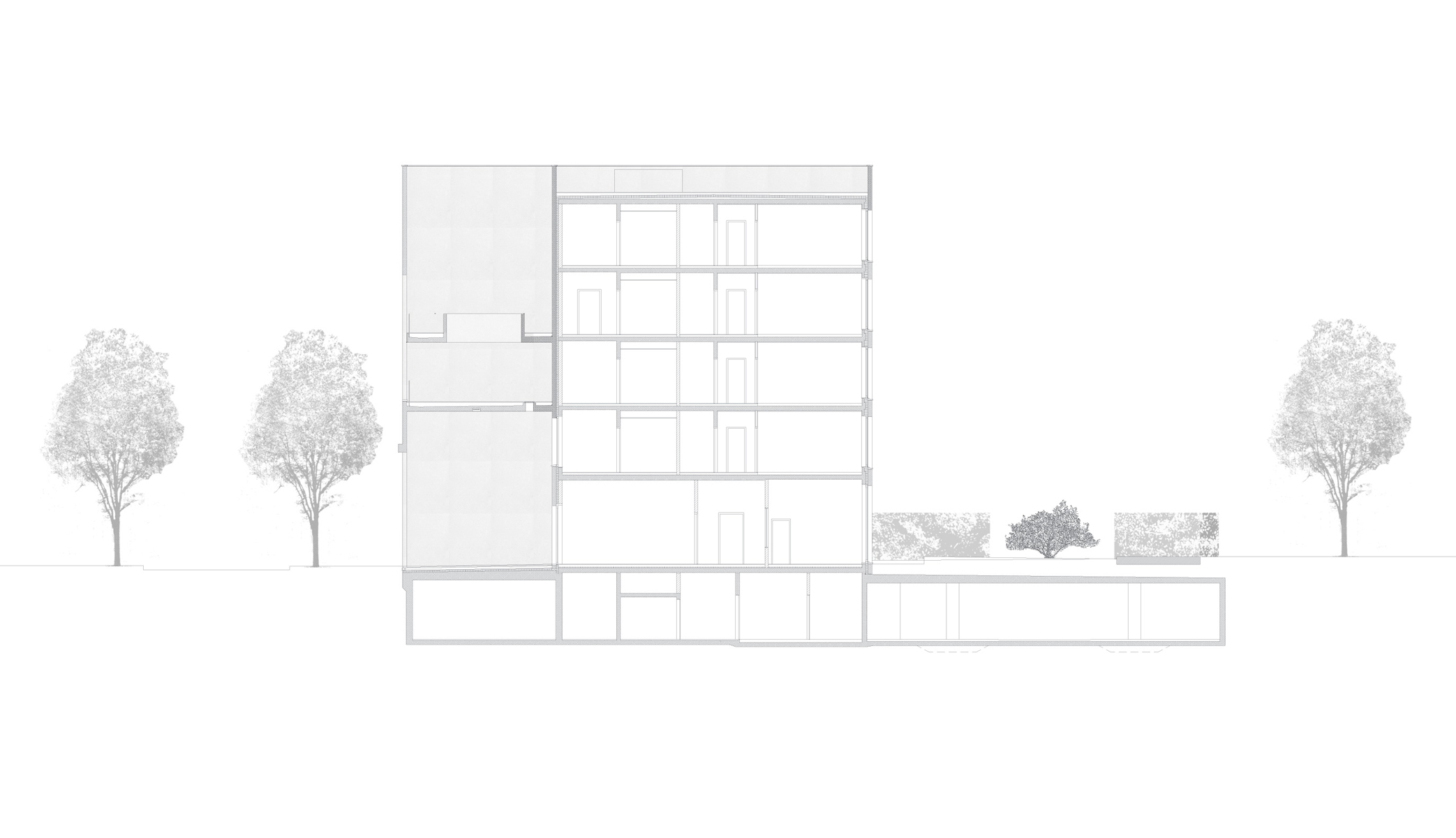